JPMorgan Chase & Co.’s new Manhattan headquarters is meant to be an ode to the both company and the city — a monumental glass-and-steel tower that says the nation’s largest bank grew up here. But New York may be losing its lustre.

Despite more than two centuries of history in a city synonymous with the global financial industry, JPMorgan is quietly shrinking its workforce there. The bank’s been building up its presence in other locations and is now considering relocating several thousand New York-based employees out of the area to help rein in costs ahead of a possible economic downturn, according to people with knowledge of the bank’s strategy.

One option is to sell the investment-banking headquarters, at 383 Madison Ave., long the main hub for JPMorgan’s bankers and traders. Executives are deciding what roles could be relocated to lower-cost hubs such as Plano, Texas; Columbus, Ohio; and Wilmington, Delaware. In the investment bank and asset-management group, the moves will primarily affect non-client-facing workers, but could also impact junior-level investment bankers, some of the people said.

JPMorgan spokesman Joe Evangelisti said the bank believes it’s healthy to continually review its facilities and where employees are based, and that the new headquarters will house twice as many employees as the old tower did.

“We are committed to the NYC metro area,” he said. “We expect it to be our largest location for the foreseeable future.”

JPMorgan has already made plans to move hundreds of New York-based credit-risk jobs to Texas and to station some senior-level employees of the consumer bank there, according to people with knowledge of the matter. JPMorgan also has told some staff that the New York region will no longer be a hub for compliance. 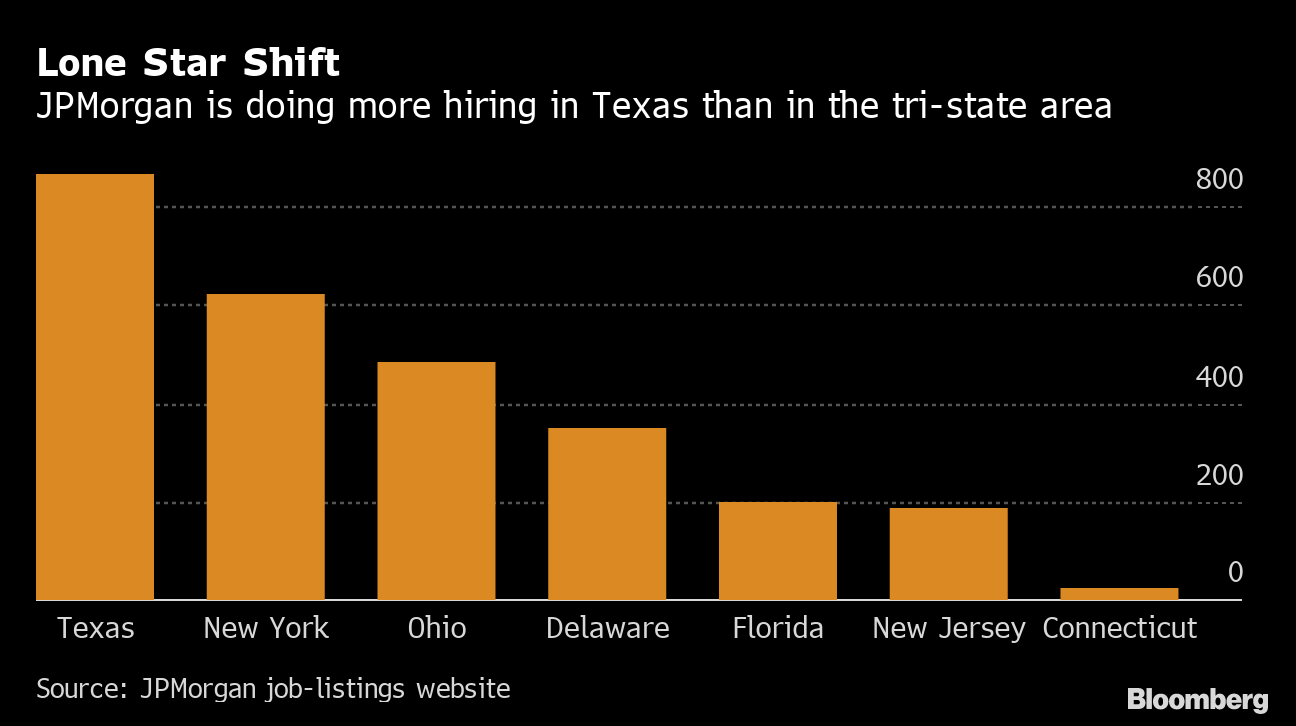 The moves mark a new era for JPMorgan, which has helped companies and governments raise capital from its New York perch under 61 mayors — and once even bailed the city out of a fiscal crisis. For New York, it’s the latest retrenchment by a financial institution and another black eye after online retail giant Amazon.com Inc. in February canceled plans to place its second headquarters in the city, undermining New York’s quest to transform itself into an East Coast alternative to California’s Silicon Valley.

Big banks and money managers have been moving employees away from New York and its surroundings to cheaper U.S. cities for years. Goldman Sachs Group Inc. has built up operations in Salt Lake City, Deutsche Bank AG has expanded in Jacksonville, Florida, and AllianceBernstein Holding LP last year announced plans to move its corporate headquarters to Nashville, Tennessee.

But JPMorgan had seemed to buck the trend: Chief Executive Officer Jamie Dimon said last year the bank was “recommitting ourselves to New York City” as it announced plans to build a new headquarters at 270 Park Ave. A year earlier, it committed to more than tripling the size of its technology hub on the west side of Manhattan. Some of the focus was not on only New York but the wider area: in 2015, the bank made an agreement with Jersey City, New Jersey, to move more than 2,000 information-technology jobs across the Hudson River.

Still, it’s quietly accelerated the buildup of a new base in the Dallas suburb of Plano. The bank already has 25,000 workers in Texas and started construction this summer on a 12-story tower that will house about 4,000 employees, increasing its total employment in the state.

“There are more JPMorgan Chase employees in Texas than any other state outside of New York,” he said. “I’m sure it will be No. 1 soon.”

The moves are a response to a variety of forces that weigh on companies doing business in New York, including high taxes and expensive real estate. JPMorgan is also making good on a threat to move jobs out of the city after Mayor Bill de Blasio’s administration in 2014 rejected the bank’s demands for as much as US$1 billion in tax breaks and cash to keep employees in New York. Dimon said privately in the years after the financial crisis he didn’t think New York politicians stood up for one of the region’s biggest industries.

The collapse of the Amazon deal also hurt one of the arguments for keeping more employees in New York, according to people briefed on the plans. Executives had hoped Amazon’s arrival would lure more tech-savvy workers to the area, with JPMorgan planning to draw from the same pool to add to its 50,000 tech staffers, said the people.

“Location strategy is not simply about costs,” Evangelisti said “We build in places to be close to local talent such as Palo Alto, to better serve clients and for business resiliency reasons.”

Discussions about JPMorgan’s overall location strategy remain fluid, and the bank doesn’t yet have a final tally on how many employees it will keep in New York. One person with knowledge of the talks said the decisions hinge on how many people the bank decides to put at its new headquarters, and whether the bank decides to sell 383 Madison, which was picked up in the fire-sale purchase of Bear Stearns Cos. in 2008 and is serving as a temporary staging area for executives while 270 Park is dismantled. JPMorgan has not yet determined what to do with 383 Madison, and any decision may be years away.

The discussions are affecting hiring decisions, with some teams being told to restrict their searches for new hires to candidates already based in lower-cost locations, some of the people said. Already, the firm has more job openings in Texas than it does in New York, New Jersey and Connecticut combined, according to listings on its website.

Cheap housing and the absence of a state income tax have made Texas popular with workers, while low corporate taxes and a reputation for a pro-business regulatory environment have persuaded large employers to relocate. JPMorgan struck a deal with the city of Plano in 2016 to relocate 4,800 employees to the area in exchange for a US$4.9-million economic grant and a temporary tax abatement.

For JPMorgan employees, a move comes with some perks. In New York’s Tribeca neighborhood, US$1.05 million will get you a 605-square-foot, one-bedroom apartment with an open kitchen, windowless bathroom and shared roof deck. In Plano, the same price gets you a 5,684-square-foot home with five bedrooms, six bathrooms, a 400-bottle wine room, a covered patio with wood-burning fireplace and a combined pool and spa.

In some ways, it’s vintage Jamie Dimon. He built JPMorgan into the most profitable lender in banking history by being a sober risk manager with a penchant for cutting costs to defend the company’s “fortress balance sheet.” And JPMorgan is tightening its belt more than in previous years amid a growing number of potential pitfalls for the economy.

Cost cuts were the focus of a town-hall meeting with finance employees earlier this year that marked Jennifer Piepszak’s first as chief financial officer, a person with knowledge of the matter said.

JPMorgan has about 37,000 employees in the New York metro area, which includes New Jersey, around half of whom are branch employees, according to a person familiar with the matter. The bank is planning to consolidate its Manhattan operations at 270 Park once construction is complete around 2023.

Dimon, always the hard bargainer, hasn’t been shy about his discontent with the Empire State’s high costs, and has indicated the bank could move employees to other states.

In 2013, he praised Florida’s business-friendly policies and joked that he sometimes wonders why JPMorgan doesn’t relocate to Miami. The bank at one point considered moving its headquarters to the Sunshine State, but executives pushed back over issues including the quality of Florida’s schools, said one person familiar with the talks.

And, in February 2018, when Amazon was searching for an HQ2 location, Dimon said he’d call the governor of whichever state offered the second-best package and move 50,000 people there to get the same deal.

“I’m not kidding,” Dimon said at the time. “You gotta fight for your company, folks, just keep that in mind. If you don’t, no one else does.”

--With assistance from Gwen Everett.