Once one board is chosen, whoever is at the top of Rogers will still get to call the shots: Lawyer

Canada’s most dramatic corporate showdown in years moved to a Vancouver courtroom Monday as Edward Rogers asked a judge to validate his move to stack the board of Rogers Communications Inc. with his allies.

The company says his new board is illegitimate and has joined with Edward Rogers’s mother, Loretta Rogers, and two of his sisters, Melinda Rogers-Hixon and Martha Rogers, to fight his effort to grasp control.

Justice Shelley Fitzpatrick of the Supreme Court of British Columbia expects to hand down a decision on Friday at 2 p.m. Vancouver time (5 p.m. in New York).

It’s a case that has laid bare the tensions and squabbles inside one of Canada’s richest families, worth about US$10 billion according to the Bloomberg Billionaires Index.

Most of that wealth comes from a controlling stake in Rogers Communications. It’s Canada’s largest wireless company with more than 11 million customers and has extensive holdings in cable and internet service, TV broadcasting, radio and sports, including the country’s only Major League Baseball team.

The public company is controlled by a family-owned trust that has about 97 per cent of the voting shares. Edward Rogers says that as chair of that trust, he controls the votes and can choose the directors on his own -- and submitted a shareholder resolution to do so on Oct. 22, against the wishes of his family members.

His petition seeks an order from Justice Fitzpatrickto legitimize that move.

‘IT MAKES NO SENSE’

On Monday, one of his lawyers, Ken McEwan, told the court the case comes down to a “simple and narrow question”: Can Edward Rogers, as the controlling shareholder, use a written resolution to replace company directors?

The Business Corporations Act of British Columbia, where the company is registered, permits such use of a “consent resolution” as long as it’s backed by more than 66 per cent of shareholders, while Edward represented 97 per cent, McEwan argued.

The company contested that.

“If Mr. McEwan was right, Mr. Rogers could change his mind in six months and replace any director. He could replace the board -- again. He could replace management -- again,” said David Conklin, a lawyer representing Rogers Communications. “It makes no sense.”

Under the B.C. Act, companies have the authority to modify such rules, and Rogers Communications’ articles of incorporation require a shareholder meeting in order to remove directors and elect new ones, the company argued in its response.

Circumventing the company’s rules infringes upon the rights of all shareholders -- both voting and non-voting -- to critical disclosures, such as why Edward Rogers sought the removal of five directors and how his changes represented a “de facto change of effective control” within the company, Rogers Communications said in its response. Shareholders in a public company must be informed of such material information that could impact their investment decisions, the company said.

Loretta Rogers has called her only son’s actions “unconscionable” and says he circumvented a commitment enshrined by her late husband, founder Ted Rogers, to settle such disputes with a shareholder vote.

The family fight has been escalating since September, when Edward Rogers attempted to oust Chief Executive Officer Joe Natale, citing concerns about performance and his ability to lead the company through a US$16 billion takeover of Shaw Communications Inc., a deal that will transform the company if it is approved by regulators next year.

His plan was to install Chief Financial Officer Tony Staffieri in the top job. Instead, Edward Rogers’s family members joined five independent directors to block the change and fire Staffieri on Sept. 29. 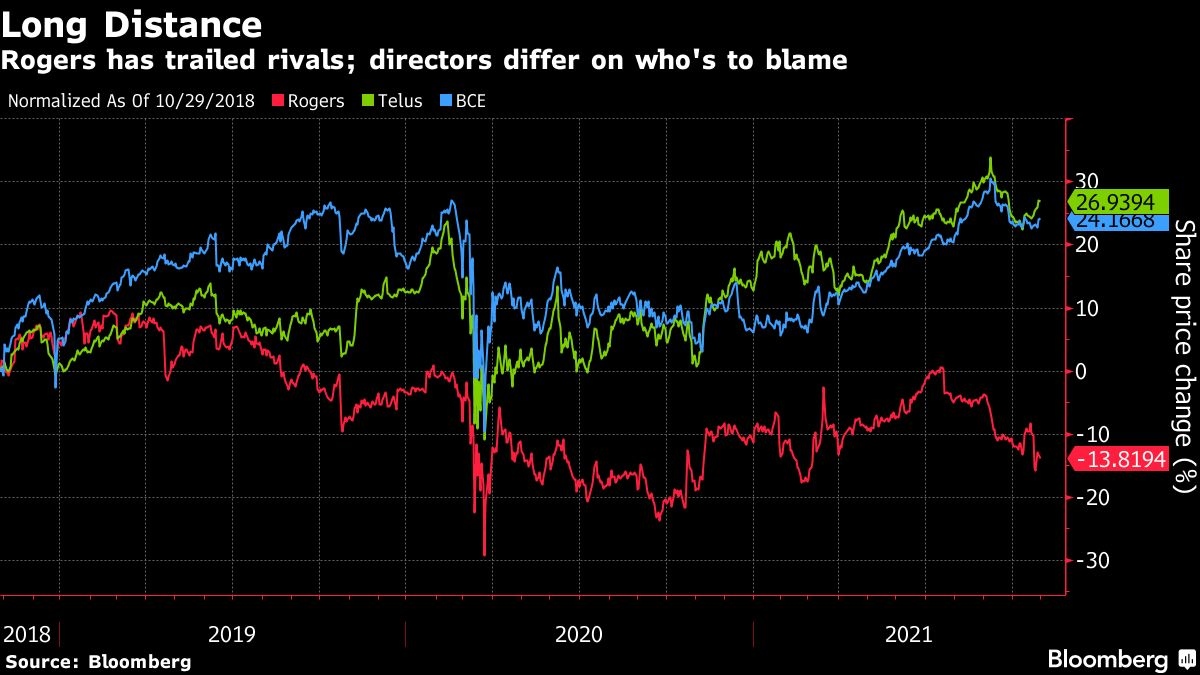 About three weeks later, the board stripped Edward Rogers of his role as chairman and gave it to lead independent director John MacDonald, a former AT&T executive.

That night, Edward Rogers ordered letters mailed to all Rogers Communications’ Class A voting shareholders proposing a written resolution to replace the five directors who’d opposed him. By signing it himself the next day, “it took immediate effect as it was executed by holders of over 97 per cent of the Class A shares,” according to a letter his lawyers sent to the company.

A meeting of the “new board” took place on Oct. 24 and named him chairman. The company says the meeting was invalid.