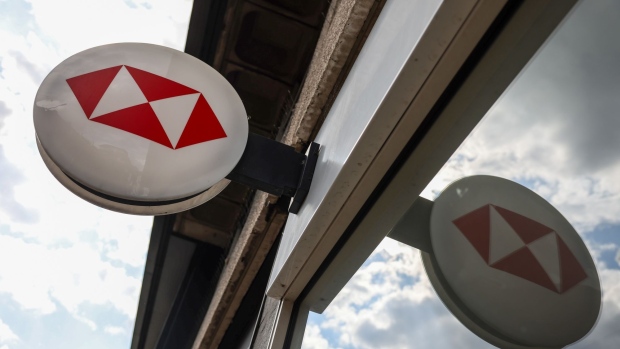 A HSBC Holdings Plc bank branch on King Street that is set for closure in the near future on Thursday, in Hammersmith district of London, UK, on Tuesday, July 26, 2022. HSBC are due to report second-quarter earnings on Aug. 1. Photographer: Hollie Adams/Bloomberg , Bloomberg

(Bloomberg) -- Two property developers won a bid to have a British judge recuse themselves from hearing their case against HSBC Holdings Plc, after arguing that a loan from the bank to a hot yoga studio owned by the judge raises the “perception of possible bias.”

The judgment in the case dated Jan. 20 also details publicly for the first time how the wider case has dragged in HSBC’s Chief Executive Officer Noel Quinn, with Maggie and Tony Ryan — the couple behind the formerly AIM-listed Mar City Plc — claiming a “long and close personal relationship” with Quinn.

The Ryans have been battling with the lender and the administrators for Mar City in the courts since 2021 over its collapse. The bank provided financing including a £10 million ($12.4 million) personal loan before the homebuilder suffered financial difficulties and entered administration in 2016.

The Ryans have been seeking permission to bring a case over Mar City’s failure. They lost a ruling in June 2022 when Judge Nigel Gerald viewed their allegations as having “no evidence” and an attempt to “blacken” the name of HSBC, according to the judgment.

But on Friday, the Ryans won a bid to have Gerald step aside and their permission application reheard after arguing that his business associations with HSBC — the bank is a lender to a hot yoga studio Gerald and his wife own in Brixton — should have been disclosed.

The studio received some £125,000 in pandemic loans from HSBC and the Ryans sought an order for his recusal for not disclosing the connection, according to the judgement. Gerald for his part has said it had “not even crossed my mind” that the relationship, which he called “essentially transactional,” needed to be disclosed. He said there was never any relationship with HSBC or personal guarantees from himself or his wife.

But a more senior judge who heard the Ryans on the issue said a fair minded observer could have perceived “a real possibility of bias” against the Ryans and in favor of HSBC. He said that Gerald didn’t properly consider the Ryans’ personal relationship with Quinn and other managers “and the trust and confidence they reposed in them.”

An observer “would be concerned about this aspect of the case,” the judge said as he ordered the hearing to be reheard by another judge. He said there was no finding of actual bias. The judiciary press office said separately it wouldn’t comment on Gerald.

The judgment also describes evidence given by the Ryans, who say that Quinn’s daughter worked for Mar City and was involved “in making contact with Mr. Quinn to assist in the provision of the additional finance provided by HSBC” in 2015.

Quinn, who grew up in Birmingham and whose first job was working on a building site, led HSBC’s commercial banking operations in the UK until 2011 before he was elevated to lead similar operations in Asia. He was promoted to interim CEO of HSBC in 2019 before being given the job on a permanent basis in March 2020.

A spokesperson for HSBC and the Quinns declined to comment.

Mar City listed on London’s AIM in 2013, which is focused on small companies, and saw its market capitalization climb as high as £187 million before it was wiped out following concerns over a cash flow crisis and a “significant” related-party debt. In 2015, HSBC provided a £10 million personal loan to the Ryans to help pay down the debt. But ultimately, the Ryans say, HSBC’s corporate recovery teams forced the firm into administration.

HSBC asserts it repeatedly tried to help Mar City restructure, according to the ruling.

“HSBC supported MCPLC in its attempts to restructure and fend off attempts from other creditors of MCPLC to wind it up,” the bank’s lawyers said in a 2022 filing, which is detailed in the judgement. “As a creditor HSBC was ultimately entitled to exercise its rights as lender and creditor and to seek to recover debts owed to it.”