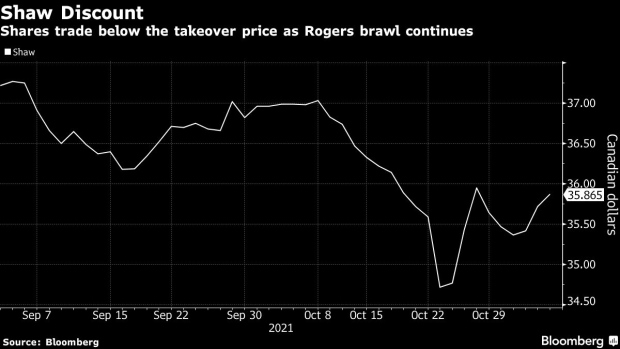 (Bloomberg) -- For weeks, one of Canada’s wealthiest families has been publicly tearing itself apart in an epic battle for control of Rogers Communications Inc., the country’s largest wireless firm.

Now it’s decision time in the case of Rogers versus Rogers.

The situation is so wild that, since Oct. 24, two different men have claimed to be chairman, leading two different groups of directors. The power struggle ended up in court, and the Supreme Court of British Columbia is scheduled to issue a ruling on Friday at 2 p.m. Vancouver time (5 p.m. in New York).

In the midst of this feud, the company is trying to complete the largest deal in its history: the $16 billion takeover of Shaw Communications Inc., which will make Rogers a nearly-national player in cable and internet service. It faces a long climb with antitrust regulators, but the company wants to close the transaction in the first half of 2022.

Here’s what you need to know heading into the court ruling.

Edward Rogers, son of late founder Ted Rogers, tried to fire the chief executive officer and replace him with the chief financial offer. His mom, Loretta Rogers, two sisters and several independent directors said no and booted out the CFO instead.

So Edward moved to fire the directors who disagreed with him (except his family). Before he could do it, the board ousted Edward as chairman.

Then some members of his family tried, but failed, to limit his power at the Rogers Control Trust, the entity that has 97.5% of the voting shares of Rogers Communications. Edward is still the chairman of the trust, which means he controls those votes.

Now Justice Shelley Fitzpatrick will decide whether he can use that voting power to change the wireless company’s board with the stroke of a pen, without asking other shareholders what they think.

A clear ruling by Fitzpatrick in Edward’s favor probably means quick change at Rogers Communications. He would have the right to replace the five independent directors who opposed him -- including former AT&T executive John MacDonald and former Ontario Premier David Peterson -- and install his own allies. They might resign first.

The change would give Edward a majority on the 14-person board, opening up a path for him to get rid of Chief Executive Officer Joe Natale, with other senior executives sure to follow. Under Edward’s original plan, as many as nine of 11 senior executives on Natale’s team would likely depart.

Already, Dave Fuller, who runs the company’s wireless division, has declared he wants to work for Natale and no one else. Wireless is its most-important business, accounting for 59% of its revenue and 72% of its adjusted Ebitda in the nine months ended Sept. 30.

Who would be CEO? Edward’s original plan had been to put longtime CFO Tony Staffieri in charge. Staffieri was sacked by the board on Sept. 29 when it decided to keep Natale.

It’s unusual to say the least: investors could see a major public company name a CEO who was fired by that same company six weeks earlier.

However messy it would be, some analysts argue that a ruling in Edward’s favor would at least provide certainty about who’s going to be in charge to handle the Shaw deal.

The company is fighting against Edward’s lawsuit and has most of the Rogers family on its side. If they win, things gets complicated.

Edward Rogers would have to take the long route to getting what he wants and ask for a shareholder meeting to vote in the directors he wants. Under British Columbia corporate law, the company would have to hold the meeting within four months.

In the meantime, the current board would stay in place, and the majority of directors back Natale and his management team.

Rogers Communications and Shaw would continue to work on getting regulatory approval for the merger, but it isn’t clear that they’d be able to advance the process at the same speed, given the distraction of looming shareholder meeting.

Shaw’s stock price has seen a recent dip as investors begin to bet on a longer closing time for the deal, or a higher risk that it falls apart. It’s trading 11% below the takeover price of C$40.50 ($32.55) a share.

A drawn-out, monthslong battle for the board could also weigh on Rogers shares, which already trade at a deep discount to BCE and Telus, partly because of governance concerns.

The anti-Edward side appears to be betting that a loss at the B.C. Supreme Court would force him to the negotiating table. His sister, Melinda Rogers-Hixon, had proposed a compromise in October that would have seen Edward Rogers remain as chairman of Rogers Communications in exchange for him dropping his demand for new directors, according to people familiar with the discussions. But it was rejected.

“I think ultimately this family, like other families, will resolve this at the kitchen table,” Walied Soliman, a lawyer for Rogers-Hixon, said last month.