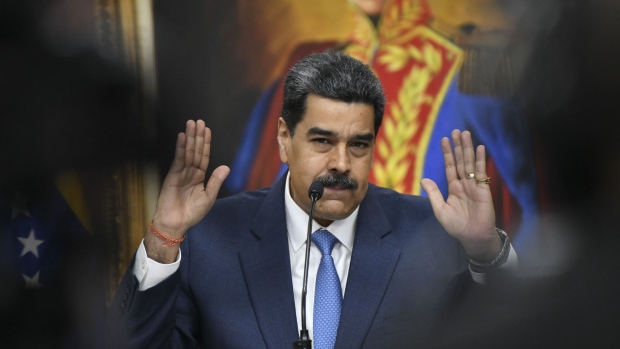 (Bloomberg) -- A London judge delivered a blow to Venezuelan President Nicolas Maduro’s attempt to retrieve $1 billion of gold in Bank of England vaults, ruling that opposition leader Juan Guaido should be recognized as the country’s interim president.

In deciding the ownership of the gold, the court should accept the U.K. government’s “unequivocal” recognition of Guaido, Judge Nigel Teare said Thursday. The decision dismisses the attempt by Maduro-appointed executives at Venezuela’s central bank to set aside the comments.

The bank sued the BOE to get the gold that it says is urgently needed in a joint effort with the United Nations Development Fund to fight the Covid-19 pandemic. The bullion has been in limbo since U.S. officials successfully lobbied their British counterparts last year to block Maduro from withdrawing the gold.

The U.K. government last year said it recognizes Guaido as Venezuela’s interim president until new, credible elections can be held.

“Today’s decision recognizes the legality of our interim government as we transition into democracy,” Guaido-appointed Attorney General Enrique Sanchez Falcon said in a phone interview. “It also establishes a criteria that will surely impact other ongoing trials.”

Sanchez, who called the judge’s ruling a “triumph,” said the opposition planned to safeguard the gold for the time being, as part of Guaido’s efforts to secure Venezuela’s financial assets abroad.

The Venezuelan bank said it planned to seek permission to appeal. A representative for the Bank of England declined to comment.

The judgment “entirely ignores the reality of the situation on the ground,” Sarosh Zaiwalla, a lawyer for the bank, said. “This outcome will now delay matters further, to the detriment of the Venezuelan people whose lives are at risk.”

(Updates with comments from Guaido’s prosecutor starting in the fifth paragraph.)