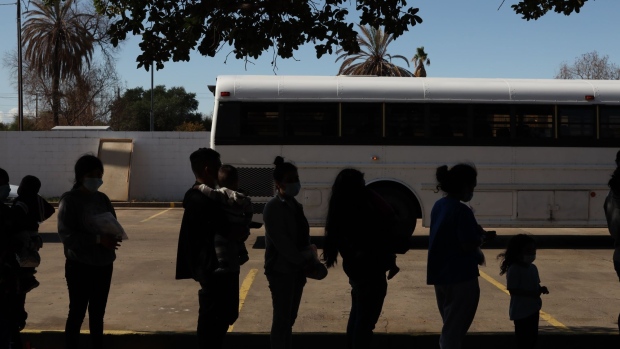 Migrants stand in line outside the Holding Institute shelter in Laredo, Texas, U.S., on Saturday, May 15, 2021. President Joe Biden sought to ease tensions with his political allies by quadrupling the limit on the number of refugees who can enter the U.S. after months of administration wavering and reversals over increasing the cap. , Bloomberg

(Bloomberg) -- A federal judge temporarily blocked Texas state troopers from enforcing the governor’s order to stop anyone who isn’t in law enforcement from transporting migrants along the Texas border. The judge’s order, in effect until Aug. 13, also temporarily prevents troopers from pulling over and impounding any vehicle suspected of transporting migrants who might have Covid-19.

The U.S. Justice Department sued Texas on Aug. 30 and asked for an emergency suspension of Republican Governor Greg Abbott’s order, claiming Texas has no right to interfere with the federal government’s administration of immigration policy.

“If states could regulate -- or outright ban -- federal officials and partners from performing their duties on behalf of the United States, the federal government would grind to a halt,” Justice Department lawyers said in their request to rescind Abbott’s July 28 order. They also faulted the governor for failing to explain how “restricting the identify of the person who can transport those noncitizens has any relevance to stopping the spread of Covid-19.”

Texas asked U.S. District Judge Kathleen Cardone of El Paso to reject the DOJ’s bid to block or rescind Abbott’s order. The state claimed the Biden Administration’s challenge should be rolled into a lawsuit Texas filed in April, attacking Biden for suspending Trump’s policy of immediately ejecting all migrants on fears they might have Covid.

“The Biden Administration’s open-border policies allow Covid-infected migrants to spread disease in Texas,” state lawyers said in a court filing. “Texas was not required to sit on its hands.”

Critics said they feared Abbott’s executive order would lead to widespread racial profiling by troopers stopping, redirecting or impounding vehicles carrying suspected migrants who might have the virus.

Border patrol agents logged 645,626 encounters with unauthorized immigrant in Texas through the end of June, according to CBP’s fiscal 2021 data. The agency reported a 900% increase in Covid infections among migrant detainees in the Rio Grande Valley sector.

Abbott blamed these immigrants for Texas’s spiking Covid infection rate, even though statewide vaccination rates have stalled at less than 50% and Abbott outlawed local mask mandates.

Abbott defended his stance in a July 30 letter to U.S. Attorney General Merrick Garland, claiming he has emergency authority to control the movements of people during a disaster, which he recently declared over the surge of undocumented immigrants at the border. “No doubt the Constitution authorizes the federal government, not states, to administer the immigration process,” Abbott said. “However, the Constitution does not allow the Biden Administration to fabricate its own immigration laws.”

In late July, Abbott deployed the Texas National Guard to assist state police in arresting undocumented immigrants on trespassing charges and detaining them in state prisons.

On Saturday Aug. 1, a Fox News correspondent tweeted drone footage of what he said were hundreds of migrants being detained by border patrol under a highway bridge in Mission, Texas, near a popular Rio Grande crossing area.