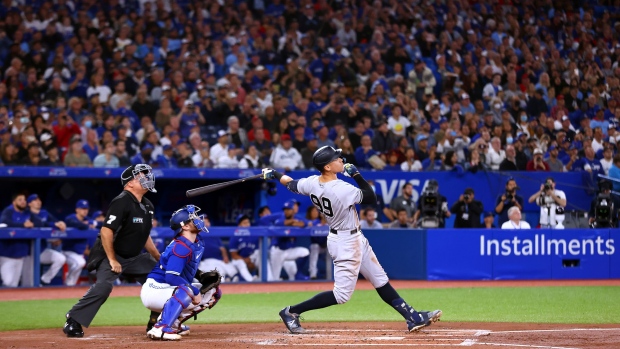 Judge’s march to the record has been reaping steady rewards for the team. Fans have been tracking his pursuit for months, helping to propel the Yankees to third place in Major League Baseball attendance per game this year, up from eighth place in 2021, according to ESPN.

The home run, in the seventh inning, helped Yankees clinch the game against the Toronto Blue Jays, winning 8-3.

Ratings for the YES Network, a regional sports channel owned by a consortium that includes the team, Sinclair Broadcast Group Inc. and Amazon.com Inc., are up this year, thanks in part to Judge’s banner year and the team’s division-winning record heading into the playoffs. The network said viewership is up 26% this season and is on pace to be the highest in 11 years.

On Wednesday, the network said the prior night’s match-up against the Blue Jays was its most-watched telecast since Derek Jeter’s final Yankees home game in 2014.

Judge, 30, is also in contention for the MLB’s elusive Triple Crown -- which means leading the league in homers, batting average and runs batted in.

His success could help him negotiate a lucrative new contract when he becomes a free agent after this season. He reportedly turned down a seven-year, $213.5 million extension from the Yankees earlier this year.

“We value him, both as a person and as a player,” Yankees President Randy Levine said this week in an interview with Bloomberg’s “Business of Sports” podcast. “We’re going to be extraordinarily competitive in trying to make sure he’s a long-term Yankee.”

“We’re not going to leave any stone unturned in trying to bring him back,” Levine said.

The Yankees have seven games left in the regular season, so Judge still has a chance to set a new American League record. On Friday, the Yankees will head back to New York for a three-game series versus the Baltimore Orioles.

Friday’s game, which was slated to air on Amazon Prime Video, will also now be available on the YES Network. That will be a relief to New Yorkers after the Sept. 23 game aired exclusively on Apple TV+, despite New York Attorney General Letitia James urging that it should also be shown on the local cable network.

The overall record for home runs in a single season is 73, set in 2001 by Barry Bonds, a mark considered controversial because Bonds allegedly juiced his performance with steroids.