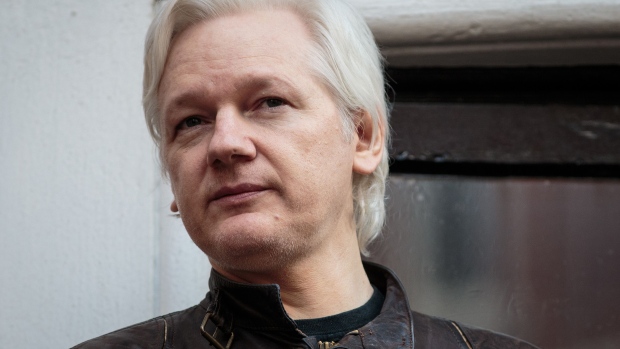 LONDON, ENGLAND - MAY 19: Julian Assange speaks to the media from the balcony of the Embassy Of Ecuador on May 19, 2017 in London, England. Julian Assange, founder of the Wikileaks website that published US Government secrets, has been wanted in Sweden on charges of rape since 2012. He sought asylum in the Ecuadorian Embassy in London and today police have said he will still face arrest if he leaves. (Photo by Jack Taylor/Getty Images) , Photographer: Jack Taylor/Getty Images Europe

Mexico is ready to offer WikiLeaks founder Julian Assange political asylum and is in favor of him being granted a pardon.

President Andres Manuel Lopez Obrador said Monday he celebrated a decision by a U.K. judge blocking Assange’s extradition to the U.S., citing the risk of suicide in a American jail.

“Assange is a journalist and he deserves an opportunity,” Lopez Obrador said in his daily press conference. “I’m in favor of pardoning him. We’ll give him protection.”

The U.K. judge’s decision gave Assange a legal victory after close to a decade of imprisonment or self-imposed exile. Assange could be released from the high-security prison where he is currently held as soon as Wednesday, when his lawyers will return to court to argue what they have called the “strongest grounds to granting bail” in light of Monday’s ruling.

AMLO, as the leader is known, said he was glad Assange is being protected and that the extradition wasn’t authorized, calling it a victory for justice. He will ask Foreign Affairs Minister Marcelo Ebrard to carry out the necessary paperwork for Mexico to extend the political asylum offer, he added.

Lawyers for the U.S. immediately said they would appeal the ruling, a process that could take years.