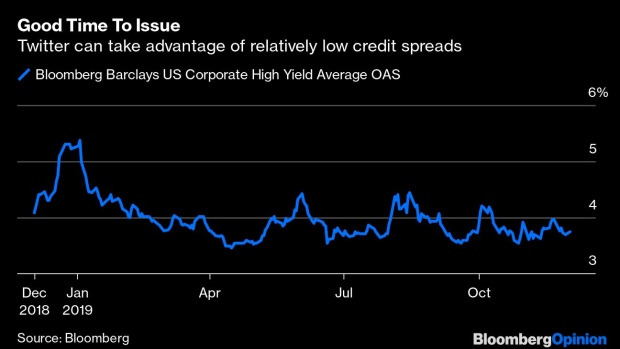 (Bloomberg Opinion) -- Twitter Inc. is joining its peers in the Big Tech club by issuing regular corporate debt. It’s bringing an inaugural high-yield bond this week to raise $600 million at an eight-year maturity.

This is a somewhat unusual issue because the social media company doesn’t really need the money; this is more about sending a message of stability to the markets — that it can raise financing with ease. Given the sharp fall in the company’s shares this year after it reported disappointing revenue in October, it seems to be a wise approach.

With almost $6 billion of cash on its balance sheet, a market cap of $23.6 billion and just $2.1 billion of existing debt, the bond market will no doubt welcome the new junk bond with open arms, regardless of Twitter’s poor equity performance.

It’s the perfect illustration of how debt markets differ from the stock market in how they perceive value. All fixed-income investors really care about is a company’s creditworthiness so that the coupon payments are maintained and the principal outlay can be repaid.

Uber Technologies Inc. and Netflix Inc. have raised substantial bonds recently, and Twitter’s $600 million deal is comparatively modest. But the new issue market for junk bonds is on fire this year because of investors’ relentless hunt for yield. Credit spreads (the difference between corporate and benchmark yields) have fallen substantially in line with the drop in government yields. There has rarely been a better time to issue debt.

And as Twitter is at the less risky end of the junk bond spectrum — one notch below investment grade, according to S&P Global Ratings — it will probably go into most major high-yield bond indexes. As a new name for credit investors, it will no doubt benefit from bond-buyers looking to diversify their holdings.

Twitter has relied previously on the convertible bond market for financing, successfully taking advantage of the share price’s high volatility (hedge funds are happy buying this type of paper knowing that it’s a cheap way of buying volatility). But the sustained drop in the stock price since that October earnings miss means it needs to explore alternatives. Its longest-dated debt, a $1.15 billion 2024 convertible bond with a 0.25% coupon has an implied credit spread of 300 basis points, but Twitter will probably improve on this in the more liquid conventional bond market.

Twitter’s business may have been struggling, but this issue should go sweetly.