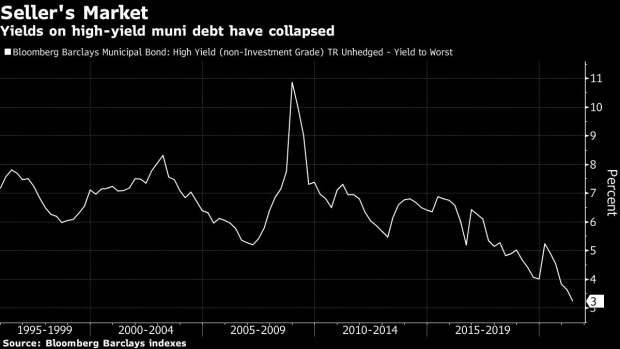 (Bloomberg) -- The municipal junk-bond boom is roaring back.

With the economy rebounding swiftly from the pandemic, interest rates on high-yield state and local government securities have tumbled to the lowest in over two decades. Cash is pouring into mutual funds focused on the junk-rated debt so quickly that money managers are fighting to get in on new deals. And prices have rallied, driving high-yield bonds to their biggest run of outperformance since 2014.

The demand is so strong that a California agency sold 35-year bonds for the development of a senior-living community at a yield of 4.43%, about two-and-a-half percentage points less than bankers initially anticipated. The price went on to surge 8% in secondary trading.

“We couldn’t think of a better time to come to market,” said Sarkis Garabedian, an investment banker at Ziegler, the underwriter on the bonds. He said the firm hadn’t seen such interest in a transaction for a new senior living campus since they started tracking the metrics in the 1980s. “We really hit the sweet spot here.”

The dynamics show how much the municipal-bond market has been swept up in the global push into higher yield assets as central banks worldwide hold interest rates low to stoke the economic recovery.

That’s fueled a surge in debt sales by corporations and governments battered by virus lockdowns. And for the state and local government debt market, it has revived the years-long rally in junk bonds that was only temporarily derailed by the coronavirus lockdowns.

So far this year, government agencies across the U.S. have sold more than $6.5 billion of bonds that can only be marketed to institutional investors able to bear the risk, driving such issuance toward the biggest year on record, according to data compiled by Bloomberg.

Cynthia Clemson, co-director of municipal investments at Eaton Vance, said the flood of demand means it’s harder for buyers to push for better protections on such deals.

Junk or unrated municipal bonds are often sold by governments or public agencies on behalf of businesses like real estate developers, clean-energy factories and others that are qualified to borrow in the tax-exempt market.

Recent bond sales have raised money for an ethanol production facility in North Dakota, a bevy of charter schools, and a youth-sports complex in Arizona. American Samoa, a junk-rated territory, is tapping the market for the first time since 2018. And the owner of a plant that recycles rice waste into fiberboard may sell more debt even though it has already been driven to default.

Buyers may be emboldened by the experience during the pandemic, when defaults remained rare even as the economic shutdowns threatened many industries that have raised money in the municipal market. Only a little over $3 billion of bonds defaulted in 2020 and 2021, a small share of the $3.9 trillion market, according to data compiled by Bloomberg Intelligence.

“Through Covid and into today, market defaults continue to be exceedingly, exceedingly low,” said Ben Barber, head of municipal investing at Franklin Templeton. “A lot of sectors that caused great concern have survived in pretty remarkable fashion.”

After a steep downturn when the pandemic first hit in 2020, high-yield municipal bonds have rallied strongly back, delivering a return of 5.8% so far this year. That’s over 4 percentage points more than the broader market, the biggest gap in returns since 2014, according to Bloomberg Barclays indexes.

Nuveen’s Anders Persson and John Miller highlighted the demand for high-yield municipals in a note this week, saying that some offerings have been as much as 30 times oversubscribed.

There seems to be little sign that demand is slowing. High-yield funds have absorbed a fourth of the $44.7 billion of inflows into muni funds this year, according to Refinitiv Lipper US Fund Flows data.

“We are on the precipice of going into full-blown return to normal and the commensurate economic boost as a result of that,” Nuveen’s Miller said in an interview this month.

“There is a lot of cash coming in and not that many bonds,” he said. “In that environment, I think spreads are going to keep tightening, bottom line.”