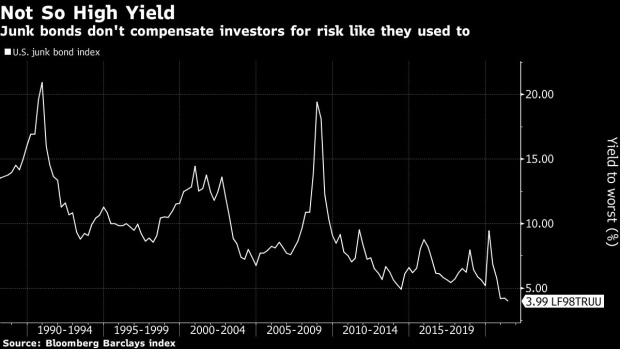 That’s the view of Randy Brown, chief investment officer of Canadian insurer Sun Life Financial Inc., who’s steering clear of the risker parts of credit that many others are chasing.

“There is a shakeout to come in the lower tiers of credit, but not the upper tiers,” Boston-based Brown said in a telephone interview on April 28. “That’s not near term. I think we probably have a couple years of runway,” said Brown, head of insurance asset management at the SLC Management unit of Sun Life, which manages $238 billion in institutional assets.

The riskiest parts of credit have been in demand ever since the Federal Reserve said in April 2020 that it would buy corporate bonds, propelling returns -- particularly for CCC rated debt. Junk-rated U.S. companies have taken advantage, setting a record for the most bonds ever sold in April, capping a 12-month issuance boom.

There’s no imminent sign of trouble, with low funding costs and a manageable maturity schedule. But Brown’s no fan of junk bonds, which yield about 4% on average -- near a record low.

“I don’t feel like I’m being properly compensated for the risk, and I can do much better in private credit,” Brown said.

Risks to lower-rated credit include the Fed tightening monetary policy sooner than expected, or at least being perceived by the market to be considering a change. An unforeseen event that affects the economy has the potential to knock companies at a time when they are issuing a record volume of bonds.

“All this debt has to be repaid at some point,” said Brown. “Nobody is worried about that today because the cost of that debt is so low.”

Another concern is that excessive bond issuance could overwhelm demand.

“We’re creating a sort of structural imbalance,” Brown said. “The supply of credit has increased dramatically -- when does the regime shift, and people decide it’s time to sell credit, and sell spread?”

Besides buying better-rated bonds, Sun Life is overweight private credit, where it particularly likes to lend to higher-quality companies and get both seniority and covenant protection. This can generate returns that are 70 basis points better than government or public company debt, Brown said.

“Those are two sectors that we think can perform well in a stable to rising inflationary environment, as long as inflation isn’t runaway,” Brown said.

Within company bonds, Sun Life doesn’t have much energy exposure, instead focusing on innovation, as well as environmental, social and governance credentials.

“We tend to avoid cyclicals,” Brown said. “We put an overweight on sustainability and disruption.”