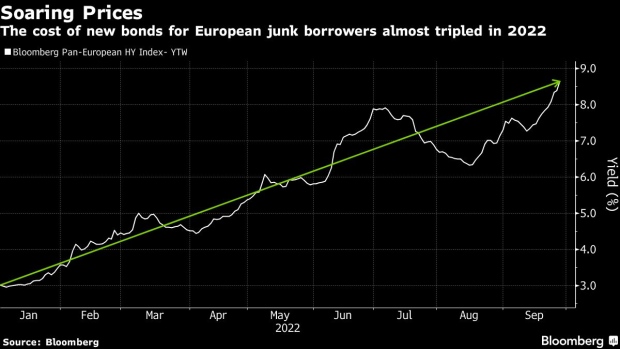 Office workers in La Defense financial district of Paris, France, on Wednesday, Aug. 24, 2022. The French government has set aside tens of billions of euros to shield businesses and households as the cost of French power jumped to a fresh record. Photographer: Nathan Laine/Bloomberg , Bloomberg

(Bloomberg) -- The junk bond market has become so selective that only well-known borrowers are able to sell bonds -- and even they have to offer sky-high rates. It’s a worrying sign for other issuers that aim to tap the market, and for banks on financing deals.

Regular debt issuer Royal Caribbean, for example, managed to sell $2 billion of refinancing bonds last month but had to offer yields at about 8.25% and 9.25% to satisfy investors in the two-part deal. That compares with a yield of about 4.2% for the US junk market index at the end of last year. Banks are dangling an eye-popping all-in yield in the 12% to 13% range for a sale for Canadian oilfield services company Enerflex Ltd.

The list of troubled deals is already significant. Banks funding the leveraged buyout of Citrix Systems Inc. got stuck holding $6.5 billion of the financing and recorded losses of at least $600 million on debt discounted to lure demand. A $3.9 billion loan and bond offering for telecom provider Brightspeed was pulled last week after struggling to attract investors.

The extremely challenging conditions came after soaring inflation and rate hikes put an end to years of easy access to debt, and appetite for riskier assets slumped following Russia’s invasion of Ukraine in February. US corporate bond sales are down about 78%, according to Bloomberg league table data. Corporate, non-financial junk bond sales in Europe, meanwhile, plummeted around 80% this year compared with the same period last year.

It all paints a concerning picture for issues in the pipeline, including Elon Musk’s high-profile $12.5 billion LBO for Twitter Inc. Banks also are preparing to fund the LBO debt for US TV ratings firm Nielsen Holdings themselves and possibly for auto parts maker Tenneco Inc.

“Investors are being quite cautious about putting their money at work and as we get toward the end of the year, that caution will increase,” said Madelaine Jones, a high yield portfolio manager at Oaktree Capital Management, in an interview on Bloomberg TV last week. Fund managers are holding onto cash “unless there is a really compelling reason” such as very attractive pricing or if the offering is from a very high-quality name, she said.

Meanwhile in Europe, two borrowers that succeeded in carrying out sizable bond issues in September -- security company Verisure Holding AB and Italian lotto company Lottomatica SpA -- did so with coupons of 9.25% and 9.75% respectively. The European junk market index had a yield under 3% at the end of last year. Two other publicly syndicated deals last month -- from House of HR and IT services provider Inetum SA -- have yet to make it across the finish line.

Verisure, which last week sold €500 million ($499 million) of new five-year notes to refinance existing ones, is a well-known name in the market and was the first European company to tap public markets after coronavirus lockdowns brought issuance to a halt in March 2020. The business is well liked, with JPMorgan Chase & Co. analysts saying demand for security systems may rise as crime increases during recessions.

Lottomatica is also perceived as a relative winner during an economic downturn, with steady cash flows and a less cyclical business model.

But with well-liked borrowers having to offer such high yields, those in less popular sectors are finding the market virtually closed. Banks scrapped plans to sell a junk bond for debut issuer Inetum and increased the leveraged loan portion instead. Meanwhile, the bond part of a financing for Bain Capital’s acquisition of House of HR -- in a sector that’s vulnerable during recession -- went quiet, with banks holding back a chunk of the debt on their balance sheets.

“The high yield market might not be accessible to all companies currently,” said Peter Low, an analyst at Lucror Analytics, singling out those that are more macro-dependent or have weak cash flow generation. “Companies with solid business models would still be able to access the debt markets, but will likely need to pay a higher coupon,” he said.

Issues in the European pipeline include names such as Italian specialty paper producer Fedrigoni SpA and Danish telecom operator TDC.

US junk bonds on Tuesday registered their biggest one-day gains in 19 weeks, but a two-day risk-on rally in financial assets faded on Wednesday.

The Philippines returned to Asia’s primary dollar bond market as yield premiums on the region’s high-rated notes extended a decline amid a global rally in risk assets.

(Updates with details on Latam Airlines debt sale. A chart was corrected in an earlier version of this story.)