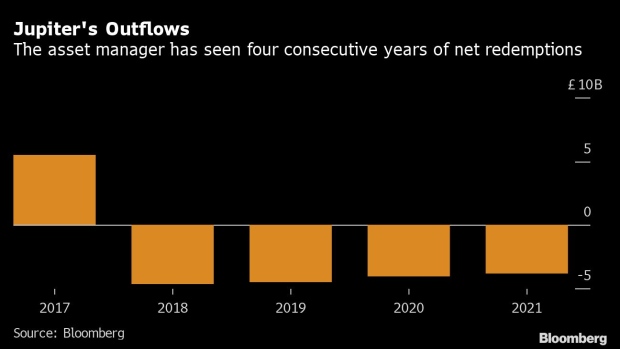 Formica, 51, will leave the position on Oct. 1 and will also resign as a director of the London-based company on that date, according to a statement Tuesday. He will be succeeded by Matthew Beesley, the company’s chief investment officer, who will take up the role of CEO with effect from that time.

Formica, who has been in the UK for almost three decades, said in a telephone interview that his departure was down to personal reasons, including wanting to be closer to elderly parents.

“I just want to go sit at the beach and do nothing,” he said in the interview. “I’m not thinking about anything else.”

Clients have pulled cash from Jupiter for four years in a row and the firm has failed to stem the outflows this year. In the first three months of the year, investors yanked another £1.6 billion, according to its latest earnings report.

Formica will remain in the business to the end of June 2023. Beesley joined Jupiter in January this year as CIO and was previously CIO at Artemis Investment Management. The board looked at external candidates as well before settling on Beesley, Formica said in the interview.

Beesley doesn’t plan to change the firm’s strategy, he said in a telephone interview after the announcement. Though he will give more details about his intentions when he takes over at Jupiter. Jupiter hasn’t yet settled on a replacement CIO, he added.