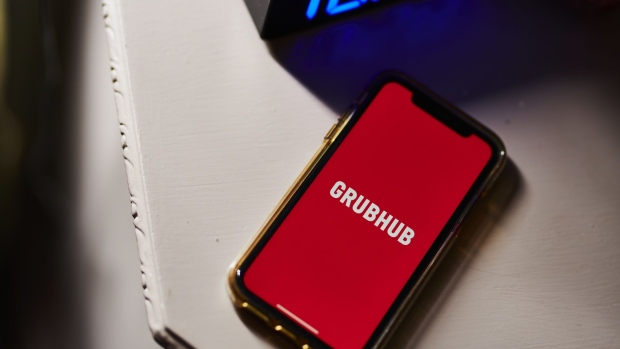 Grubhub Inc. signage is displayed on an Apple Inc. iPhone in an arranged photograph taken in the Brooklyn borough of New York, U.S., on Friday, Jan. 10, 2020. Wall Street is weighing reports that Grubhub Inc. is exploring strategic options in the midst of intense competition and steep discounts, giving fresh impetus to the idea that food-delivery companies have no choice but to merge or acquire. Photographer: Gabby Jones/Bloomberg , Bloomberg

(Bloomberg) -- A major Just Eat Takeaway.com NV shareholder stepped up its campaign to boost the company’s lagging stock performance, calling for the food delivery firm to sell or spin off its U.S. business Grubhub by the end of this year.

Cat Rock Capital Management LP, which owns about 6.5% of Amsterdam-based JET, said in a statement Monday that it urged “immediate action to unlock Grubhub value,” shortly after a capital markets day from company executives aimed at providing a strategic update to investors.

JET closed a $7.3 billion acquisition for Grubhub in June, and Chief Executive Officer Jitse Groen said at the investor event that he expected Grubhub to be part of industry consolidation in the U.S.

Alex Captain, founder and managing partner of Cat Rock, warned that a “depressed” stock price for JET made it vulnerable to a takeover bid in the statement, but that separating from Grubhub is “an obvious and actionable lever to quickly solve its valuation problem and refocus its business.”

“We believe a Grubhub sale or spinoff at any positive valuation could drive over 100% appreciation in JET’s stock,” Captain added. “If JET management fails to pull this lever by 31 December 2021, it will be clear to us and other shareholders that JET management cannot move quickly and decisively enough.”

In a response statement, JET said that while Grubhub faces “some specific challenges today, it is a large and growing business with good underlying profitability” and that the company has a turnaround plan focused on building up core markets and new businesses.

“Just Eat Takeaway.com agrees with Cat Rock that Grubhub has significant strategic value, which is why the Company believes that, over time, it will be a participant in the consolidation of the wider U.S. market,” it said.