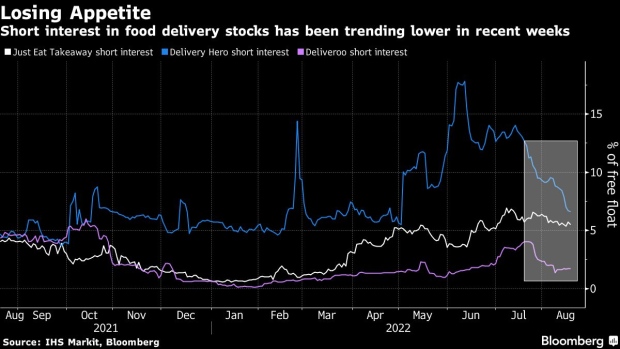 (Bloomberg) -- One of the most beaten-down corners of the European stock market is making a comeback.

Food-delivery stocks Delivery Hero SE and Just Eat Takeaway.com NV are among the biggest gainers in the Stoxx Europe 600 Index this quarter as the companies take out some of investors’ most dire concerns one by one. The rally also has gotten a boost from optimism that central banks will avoid raising interest rates too much to cool inflation.

Just Eat has surged 53% and Delivery Hero is up 46% since June 30, a stunning reversal after featuring among the top 10 decliners in the first half. Deliveroo Plc has seen a smaller rise, up 15% from its lowest closing price this year.

The sharp rebound came after the companies put more emphasis on reducing losses and showcasing a path to profit while improving their balance sheets -- just what investors have long been asking for. Just Eat’s stock surged Friday after it agreed to sell its stake in a Latin American joint venture.

“What I see now is much more comfort in that path of cash,” said Philip Webster, a portfolio manager at Columbia Threadneedle Investments who owns shares of Delivery Hero and Just Eat. “Balance sheet risk I just will not take.”

It’s not just the balance sheets that have improved. The outlook for earnings is better, thanks to higher service charges and lower marketing expenses. That has helped Delivery Hero to forecast a narrower loss this year and the other two to maintain their profit margin outlooks.

“The market was clearly looking for more rationality around profits in the second quarter,” said Andrew Porteous, an analyst at HSBC. “The messaging around profits has been even stronger than I was expecting.”

This new playbook, however, came at a cost of slower growth. Price increases put the sector at risk of losing cash-strapped customers amid surging inflation. In fact, both Delivery Hero and Deliveroo lowered their projections for growth in 2022, while transaction value at Just Eat’s platform undershot analyst expectations in the second quarter.

For now, a stronger commitment to earnings has given some investors a reason to look past dimmer growth prospects.

“I want to see this transition to profitability; this is much more important for me,” said Columbia Threadneedle Investments’ Webster. That’s because these food delivery businesses have gone through a period of “unbelievable compounding growth” but are still relatively unproven on their ability to monetize, he said.

Competition is showing more signs of easing. Deliveroo is pulling out of the Netherlands market, while Just Eat closed its operations in Romania and is eliminating hundreds of jobs in France. “We’re continuing to see rational behavior from players,” said Citigroup analyst Monique Pollard, who recommends buying Just Eat and Delivery Hero shares and downgraded Deliveroo to neutral last week.

Still, caution may be warranted: The recent rebound in shares has been driven in part by bearish speculators reversing their bets on declines in the stocks, rather than just fresh buying by bulls. So-called short interest -- a measure of how much of the stock has been sold by bears -- has been declining for all three.

The big uncertainty is whether the market’s expectations on these companies’ growth rates are at realistic levels, said HSBC’s Porteous, as their business models are set to be tested in an economic slowdown. And in the long run, investors are still unsure where these businesses will end up in an “extremely wide” range of outcomes, he said.

“We’ve got a couple of key quarters coming up from a consumer outlook perspective,” said Porteous, who has hold recommendations on Delivery Hero and Deliveroo and a buy on Just Eat. “It’s not like we are out of the woods yet.”