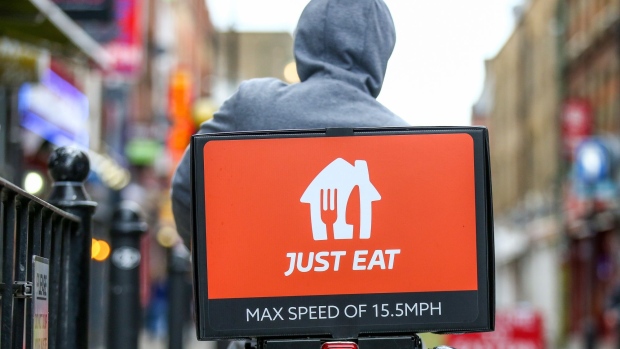 Just Eat Takeaway.com NV’s shares soared after the company announced it expects to turn profitable this year, earlier than expected, after cutting expenses on delivery costs and operations.

Just Eat expects to generate positive adjusted earnings before interest, taxes, depreciation and amortization in the second half of this year, an improvement compared with an adjusted Ebitda loss of 134 million euros ($129 million) in the first half, the Amsterdam-based company said in a statement on Tuesday.

The company, which had previously guided for a negative adjusted Ebitda margin, said it’s making improvements to the revenue and delivery costs it generates per order, and has been working on cutting other operating expenses. It said it expects to maintain positive adjusted Ebitda through next year.

The company is among a number of food-delivery stocks that have a made a comeback this quarter after the businesses, which have had to contend with a slowdown in growth after Covid-19 restrictions lifted, put more emphasis on reducing losses and improving their balance sheets.

Earlier this year, Just Eat agreed to sell its 33% stake in its Latin American joint venture iFood to Prosus NV for as much as 1.8 billion euros, a price below a previous offer the shares. It is also considering a partial or full sale of its Grubhub unit following criticism from investors that Just Eat was undervalued.

The company will provide a full update on the third quarter on Oct. 19.

Just Eat Takeaway.com’s (JET) surprise goal of returning to positive adjusted Ebitda in 2H is feasible and implies a 2022 loss at least 25% lower than consensus. That reflects management’s willingness to sacrifice growth, cutting this year’s guidance to low-single digits, in order to reach and sustain full-year Ebitda gains beyond 2023. Market exits and a vow to keep consumer fees relatively low may shield JET’s leading positions as rivals also need to increase prices to offset inflation.