Supply chain pressures may not be transitory: Scotiabank's Jean-François Perrault

It’s mid-August, and logistics manager RoxAnne Thomas’s phone won’t stop pinging. Her faucets, sinks, and toilets are waylaid near Shanghai, snagged in Vancouver, and buried under a pile of shipping containers in a rail yard outside Chicago. As U.S. transportation manager for Gerber Plumbing Fixtures LLC, a unit of Taiwan’s Globe Union Industrial Corp. that’s based in Woodridge, Ill., Thomas is trying to overcome the biggest shock wave to unsettle global trade since the dawn of container shipping almost seven decades ago.

The pandemic has thrown the vital but usually humdrum world of logistics into a tailspin, spurring shortages of everything: masks and vaccine vials, semiconductors, plastic polymers, bicycles, and even baseball bobbleheads. For Thomas it’s complicated the shipment of about 10,000 20-foot containers of bathroom equipment she brings into the U.S. each year from China and Mexico, but it has also revealed a bigger, structural challenge.

The system underpinning globalization—production on one side of the planet, connected to consumers on the other by trucks, ships, planes, cranes, and forklifts—is too rigid to absorb today’s rolling tremors from COVID-19, or to recover quickly from the jolts to consumer demand or the labor force. It’s avoided a complete collapse only through a combination of human ingenuity, painfully long hours, and, as Thomas describes a recent success, strategy, mixed with a stroke of luck.

What’s also apparent from her vantage point is that supply uncertainties, disruptions, and inflationary forces are here for the foreseeable future, perhaps into 2023. But how things play out this month, one of two peak seasons each year for goods, will be crucial in determining how long these shortages last and which companies are able to adapt. “Every step of the process, there’s still backlog,” said Thomas, 41, in one of several interviews from late July through August. “The beginning of the supply chain in China—I don’t think that’s going to get better for a year.” And the outlook more broadly? “A year and a half before things are truly back to normal.”

Although the pandemic has shuttered factories and shaken supplies of raw materials, Thomas’s chief challenge is freight, and it starts with what used to be cheap, plentiful commodities: shipping containers. About 25 million are in use globally, shuttling goods around the world on some 6,000 ships. Companies such as Denmark’s A.P. Moller-Maersk A/S or China’s Cosco Shipping Holdings Co. own or operate these vessels, with the 10 top companies controlling 85 per cent of global capacity.

Container rates and availability are usually built into annual contracts between shippers and the carriers, and these deals normally have strict requirements, such as only nonstop service between ports or a minimum of two sailings a week. But little by little over the past 18 months, Thomas has had to let those demands go and instead brawl for ship space in the spot market, where the daily rates quoted by carriers and freight agents have soared.

“Now I’m saying, ‘Just get me a box,’ ” she says. “We’re constantly fighting this battle between how much is too much to spend and how many containers can that actually get me, and it literally seems to change week to week.” Wholesalers and commercial plumbers are the main buyers of Gerber’s bathroom fixtures. The company’s biggest domestic competitors are American Standard, Kohler, Mansfield Plumbing Products, and Toto USA. Two years ago, a 40-foot container cost less than US$2,000 to transport goods from Asia to the U.S. Today the service fetches as much as US$25,000 if an importer pays a premium for on-time delivery, which is a luxury. That’s translated into big money for container carriers, with the industry on track to post US$100 billion in net profit this year, up from about US$15 billion in 2020, says John McCown, an industry veteran and founder of Blue Alpha Capital.

With the scales so tipped against them, many shippers of cargo are balking, hoping rates go down or praying that they won’t run out of things. That’s provided openings for Thomas to stretch her budget when possible and snap up the few containers that become available. “There are companies that just don’t have the finances to withstand this, and they have contracted space that they’re just not using anymore,” she says. One of Gerber’s freight forwarders, Flexport Inc. in San Francisco, recently offered a chance to get 50 extra boxes out of Qingdao, China. Even at elevated rates, Thomas jumped at the chance.

The snarls don’t end when Thomas’s containers land on a dock in North America. They next need to travel by truck or train to Gerber’s distribution centers in California, Illinois, New Jersey, Texas, and Canada. Those journeys got more complicated this summer when western Canadian wildfires slowed rail operations, and when Union Pacific Corp., a rail haulage company, stopped containers moving inland from West Coast ports so it could clear a logjam of the boxes outside Chicago as the influx of goods overwhelmed the system. A couple of containers filled with Gerber products were stuck in the gridlock for 10 weeks after a truck driver Thomas sent to the location couldn’t dig them out, she says. So even though the railroad’s temporary embargo was aimed at easing congestion, it probably pushed the delays back to the ports. Indeed the number of ships anchored outside the twin ports of Los Angeles and Long Beach more than doubled to 45 from late July to a month later.

“Even if we went to Maersk and said, ‘Just let us have the container. We’ll unload it in Los Angeles, and we’ll give it right back to you,’ it just doesn’t work that way. It’s not that simple,” Thomas says. Apple Inc., Walmart Inc., and other companies have deployed armies of supply chain professionals and leading technology to navigate the past 18 months, but the vast majority of people doing these jobs are like Thomas—they wear multiple hats, have only a handful of support staff, and went from office obscurity to holding one of the most important positions at their company almost overnight.

Thomas started this job at Gerber four years ago, after working as both a client of logistics services and at a large trucking company. Transport is a family preoccupation: Her mother, uncle, and grandfather all worked for the railroad, and dinner table chatter would often turn to routes and capacity. But Thomas recently completed a master’s in supply chain management at Michigan State University, one of the nation’s leading schools in the field, to give herself an extra edge.

Top logistics positions at large global companies can pay US$300,000 to US$400,000, but the median salary for those with an Association for Supply Chain Management (ASCM) certification is about US$90,000, with starting pay closer to US$60,000. Unfilled positions are reaching a 20-year high, and in the U.S. alone, more than 600,000 job openings are projected over the next decade, according to the Chicago-based trade group.

It’s easy to see why. About 860,000 inbound containers arrived into the LA and Long Beach ports on average each month this year, 24 per cent more than the typical monthly volume in the five years leading up to the pandemic. Some of that increase is the result of panic orders from companies nervous about running out of parts or products, but the acceleration of online shopping also has an impact. “For logistics professionals this incredible e-commerce spike required a whole new level of alignment and synchronization,” says Abe Eshkenazi, chief executive officer of ASCM. 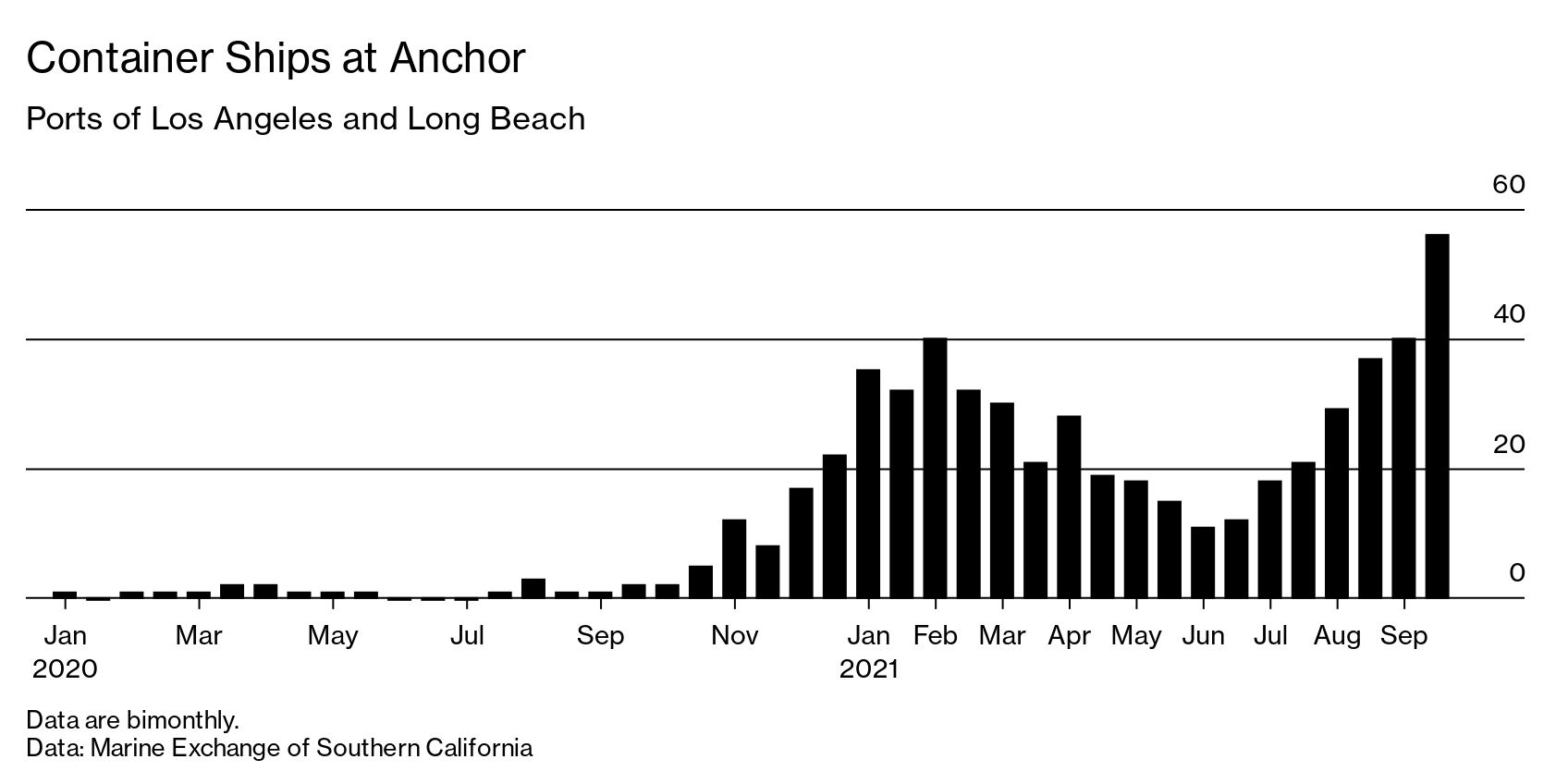 Among her concerns, Thomas must keep sight of whether such strong spending will be sustained, particularly when orders might not arrive for several months. New-home construction has been solid this year, and Gerber’s shipments have reached record highs. But to help manage the demand from customers, Gerber is allowing them to order only a certain percentage above their normal purchases.

“The fear is we’re ordering all this stuff for demand, and the demand is going to fizzle out before the product gets here,” Thomas says. With summer winding down, the big test of the global trading system’s resilience might still be ahead. Every October a weeklong national holiday in China marks the unofficial deadline to get shipments out of the world’s second-largest economy in time to reach the U.S. and Europe for the holiday shopping season. With lines of ships outside ports at their longest since the pandemic began, the pressure to meet that cutoff is stronger than ever.