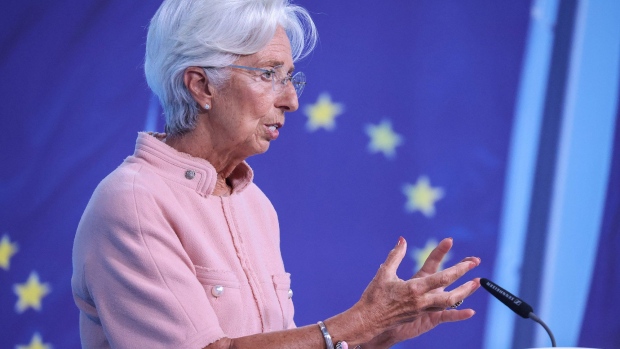 Christine Lagarde, president of the European Central Bank (ECB), speaks during a rate decision news conference in Frankfurt, Germany, on Thursday, Sept. 9, 2021. The European Central Bank will slow down the pace of its pandemic bond-buying program, an acknowledgment that the euro areas recovery is strong enough to endure on less support. , Photographer: Bloomberg/Bloomberg

“There are signs that the global economy could increasingly be a source of shocks for Europe rather than a stabilizer against volatility,”  Lagarde said.

Bottlenecks affect the “euro area more than other economies by virtue of our exposure to globalization,” she said.

In prepared remarks for the 2021 Per Jacobsson Lecture at the International Monetary Fund on Saturday, Lagarde highlighted an issue that’s currently upending world commerce, from shipping to semiconductors to food.

The just-in-time inventory management that has ruled global trade for decades is “highly vulnerable to systemic shocks,” Lagarde said.

This “imported volatility” might increase rather than decrease, she said.

Lagarde said the dynamics of international trade may shift as more firms end up holding permanently higher inventories as an insurance policy against disruptions.

There’s already evidence that some companies are holding higher levels of foreign inputs that are more difficult to source, she said.

“Faced with historically long delivery times, global manufacturers’ stockpiling of inputs continues to run higher than before the pandemic,” Lagarde said. If that persists, “we could see a more volatile industrial business cycle.”