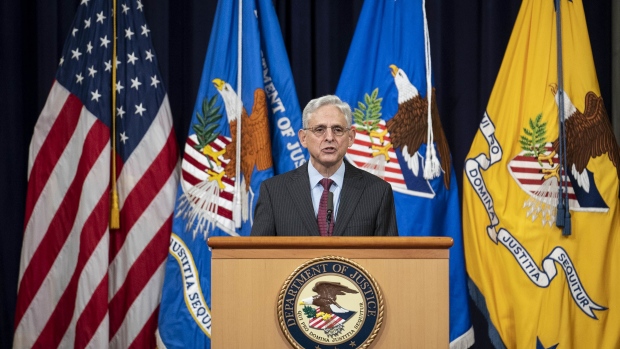 Merrick Garland, U.S. attorney general, speaks during an address at the Department of Justice in Washington, D.C., U.S., on Friday, Oct. 22, 2021. Garland announced the launch of a new initiative to combat lending discrimination. , Bloomberg

(Bloomberg) -- The Justice Department will prioritize redlining investigations with Attorney General Merrick Garland pledging the crackdown on discriminatory lending would be unprecedented in its aggressiveness.

Speaking at a Friday press briefing, Garland framed the initiative as targeting “modern redlining.” Other watchdogs at the event said that would include the use of algorithms and online data that could violate fair housing laws. The attorney general said the government has several cases in the works and that it’s likely to open more probes into whether minorities are being denied loans.

“The initiative represents the department’s most aggressive and coordinated effort to address redlining,” said Garland, adding that his agency will work with the Consumer Financial Protection Bureau, the Office of the Comptroller of the Currency and other agencies. “Together, we will proactively seek to determine if lending institutions are engaged in redlining.”

In a sign of the renewed focus, the department brought an enforcement action Friday against a unit of Trustmark Corp., alleging the subsidiary structured its business practices to avoid providing home loans and other mortgage services to people living in majority-Black and Hispanic neighborhoods in the Memphis area.

From 2014 through 2018, the unit’s alleged redlining practices included having nearly all its branches and loan officers in majority-white neighborhoods, according to the government’s lawsuit filed in federal court in Tennessee. Without admitting or denying the allegations, Jackson, Mississippi-based Trustmark agreed to pay $5 million in penalties to the CFPB and OCC. The lender, which has $17 billion of assets, will also make several changes to its lending program.

Trustmark Chief Executive Officer Duane Dewey said the bank cooperated with the investigation and settled to avoid the distraction of litigation. “We share the common goals of breaking down barriers to home financing and exploring innovative ways to help residents of underserved areas,” he said in a statement.