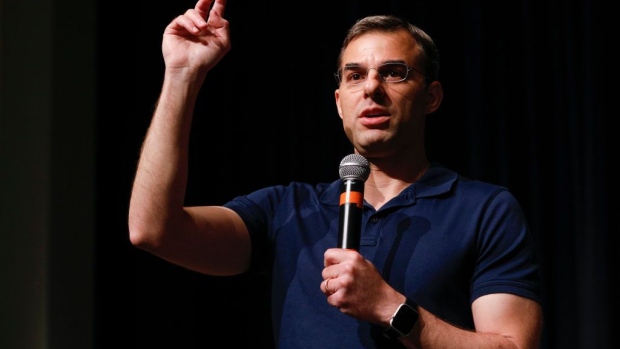 (Bloomberg Opinion) -- The possibility that Bernie Sanders will emerge from the first four states as the Democratic frontrunner for president has moderates on both sides of the aisle terrified. They face the prospect of a general election between an incumbent whose rhetoric and conduct are corroding the norms of civil society, and a challenger whose agenda threatens the underpinnings of the U.S. economy.

It also presents an opportunity for partisan renegades to alter — perhaps permanently — the political landscape in America.

Consider this thought experiment: Justin Amash, a member of Congress from Michigan who left the Republican Party last year and is now independent, changes his party affiliation to Libertarian and runs as the party’s nominee in November. Even if — realistically, when — he loses, his candidacy could help a small but powerful Libertarian contingent emerge in the House.

What would make a Trump-Sanders election different is that both candidates already appeal to the extremes of their parties. There are voters in both parties who are deeply opposed to both the Sanders agenda and the Trump presidency.

Amash embodies these voters. His policy agenda is nearly the opposite of Sanders’s, and he has profound differences with Trump’s. What’s more, Amash’s demeanor is more likable than that of the usual third-party candidate — and more mainstream than either of his potential opponents.

Is that enough to win the election? Probably not. But a high-profile, well-funded national campaign might be enough to help him hold on to his House seat. And with some judicious targeting of districts, it just might enable the Libertarian Party to add a few more.

Consider Virginia’s 10th district, which has a median annual income of $122,000 and where over half of adults have college degrees. It was solidly Republican from 1980 until 2018, when Representative Barbara Comstock lost by more than 12 points. Her defeat reflected voter dissatisfaction with Trump. The skyrocketing taxes proposed by Sanders are likely to be equally unpopular.

This strategy also makes sense over the long term, because while Trump and Sanders won’t be on the ballot again after this year, they are the result of a secular trend of increasing political polarization in the U.S. This has had at least two consequences of note.

First, the threat of primary challenges has pushed moderates in Congress toward the extremes. This phenomenon has been evident in the Republican Party for more than a decade, and if Sanders succeeds in winning the nomination it is likely to become more pronounced among Democrats as well.

Second, hyper-partisanship is drawing politicians who would previously have been attracted to third parties into the mainstream. Alexandria Ocasio-Cortez not only defeated the moderate Democratic incumbent in her New York district, she has also become one of the most prominent voices in the Democratic Party. Trump himself tried to become the Reform Party nominee in 2000, switched party affiliations several times since and was a registered independent just four years before winning the Republican nomination.

The bottom line is this: There is a growing gap in the political center, and for the first time in a long time it is feasible for third-party candidates to fill it. Libertarians have traditionally been seen as more extreme than either major party, depending on the issue. But as Democrats and Republicans rush toward the fringes, the Libertarian Party has an opportunity to re-emerge as a centrist force in U.S. politics.

No, Justin Amash won’t be the next president. But if over time Libertarians captured even a small fraction of House seats, they could gain the power to act as a broker between the two parties, providing both a cushion on tight votes and potential cover for multiparty deals. It’s a long shot, but U.S. politics is in desperate need of a stabilizing force — and in this political environment, a third party could provide it.

To contact the author of this story: Karl W. Smith at ksmith602@bloomberg.net