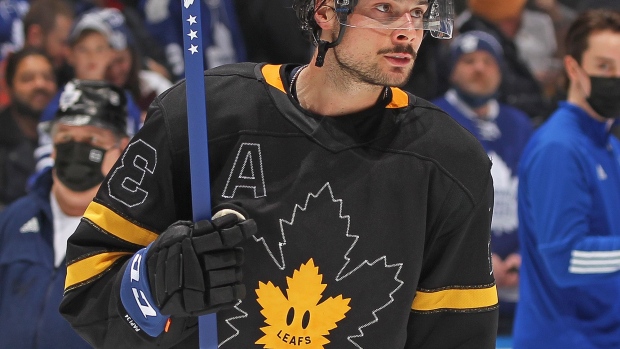 Justin Bieber and the Toronto Maple Leafs have the top-selling jersey style in hockey.

A collaboration between the Canadian pop star and the National Hockey League franchise has been the most popular purchase among fans over the last three weeks, outpacing all others across the league’s e-commerce and retail stores, according to the NHL.

The new formula involves the kind of streetwear hype normally associated with brands like Yeezy and Supreme, with the design first leaked by Martha Stewart at a party in early March a few weeks prior to release. One side of the reversible Adidas jersey is black and blue — an alternate color scheme for the Leafs on the ice. The other is black and yellow with the smiley face signature of Bieber’s Drew House fashion label.

The NHL has been trying to drum up interest among young fans in recent years. It’s getting players to become more active on social media and has built up a presence on TikTok. The league also created a youth advisory board made up of teenagers. This season, the NHL began a seven-year media rights arrangement with ESPN and Turner Sports, which brought games to streaming platforms ESPN+ and Hulu.

Bieber, who’s from Ontario, and the Maple Leafs have had a few link-ups before, including a song about his hometown hockey team and a limited-edition offer of hoodies and shirts last year. Sales of the new alternate jerseys were surely boosted by Bieber promoting the products extensively to his 230 million Instagram followers.

“It’s phenomenal and we’re so pleased,” Shannon Hosford, Maple Leaf Sports & Entertainment’s chief marketing officer, said in an interview. She added it was the first time the team has involved a celebrity in jersey creation, calling it “ a big change for our brand.”

Many sizes for both men and women are sold out and the majority of buyers are new customers for the Maple Leafs, said Hosford. The jerseys, which were for team’s annual youth-focused Next Gen games, will appear occasionally over the next two seasons and both sides are now discussing another potential project.