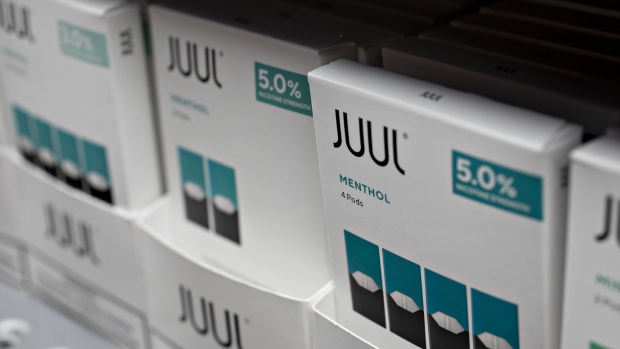 Menthos pods for for Juul Labs Inc. e-cigarettes are displayed for sale at a store in Princeton, Illinois, U.S., on Monday, Sept. 16, 2019. Faced with a worsening epidemic of teenage vaping and a mysterious illness stalking users of cigarette alternatives, the Trump administration promised to ratchet up its oversight of a burgeoning but increasingly troubled industry. Photographer: Daniel Acker/Bloomberg , Bloomberg

Juul Labs Inc. has hired former Food and Drug Administration employees and is recruiting more researchers as it prepares for a crucial regulatory hurdle that will determine the future of the top U.S. e-cigarette maker.

The company and its peers must submit applications to the FDA by May 12 in order to continue selling their products. The deadline is a defining moment for the e-cigarette industry, which has been under fire following a surge in teen vaping and a lung-injury outbreak that sickened thousands and was later tied to THC.

For Juul, securing a swift clearance is critical. The company has seen its once-rich valuation drop since the broader vaping backlash began. Failing to win the FDA’s blessing could shut it out of a market it has dominated.

Roxana Weil, formerly a lead toxicologist at the agency’s Center for Tobacco Products, joined Juul as principal scientific adviser in September. Gabriel Muniz, who worked in an FDA division that inspects tobacco manufacturers, joined Juul last month as a director of regulatory compliance.

Juul is seeking to fill a number of legal, regulatory and science-focused jobs in Washington and San Francisco, according to job listings on its website, after laying off hundreds of people and instituting a hiring freeze as part of a broader reorganization of the company.

Additionally, Mark Bertolini, the former chief executive officer of health-insurance giant Aetna, was approached about possibly serving on the company’s board last year, according to people familiar with the matter.

Weil and Muniz didn’t respond to requests for comment. Juul declined to say how many former FDA employees it has recently hired. The FDA declined to comment on personnel matters.

Vaping companies are expected to provide studies to the FDA showing their products’ health effects, potential to help smokers quit, and evidence on whether they might appeal to kids and nonsmokers. Regulators have said they want to prevent a new generation from getting hooked on nicotine after decades of progress in reducing smoking rates.

“We are focused on building a company for the long-term,” Juul CEO K.C. Crosthwaite said in a statement, by preparing scientifically rigorous approval applications.

Amanda Lang: Use common sense before you vape

BNN Bloomberg's Amanda Lang gives her take on Health Canada issuing an information bulletin about vaping warning about the harm of using these products.

To support its application, Juul has run more than 10 clinical trials and more than 100 scientific studies, according to a person familiar with Juul’s plans. Its research is measuring how the nicotine hit from Juul’s devices compares with cigarettes, and which flavors helped people stay away from smoking, among other issues.

“Juul has indicated they have good data,” said Stefanie Sandhill, co-founder of Sandhill Strategies, who has spoken to company representatives at tobacco-industry conferences. Sandhill’s investment-research firm focuses on political risk to companies.

Juul will “defer to FDA and others to evaluate the quality on a scientific basis” of its applications, spokesman Austin Finan said.

The company will enter the review after years of taking blame for fueling the teen vaping epidemic. An FDA study published last fall identified Juul as the most popular e-cigarette brand among U.S. middle-school and high-school students.

Juul has taken a number of actions to limit its products’ appeal to minors. It suspended sales of its most popular flavors, including mango and mint, last year. It also closed down social-media accounts and changed some of its marketing imagery.

Those moves appear to have been costly. Juul’s market share fell to about 57% in the four weeks ended Jan. 26, down from about 70% a year earlier, Bloomberg Intelligence analyst Ken Shea said Tuesday in a research note, citing new IRI data. Companies that get FDA authorization first will have a significant advantage in a market that Shea estimates generated approximately US$6 billion in sales last year.

“This application is everything for them,” Shea said of Juul.

Some e-cigarette makers have already submitted applications. Reynolds, a unit of British American Tobacco Plc, filed paperwork for its Vuse Solo products in October. Logic, a unit of Japan Tobacco International, sent its applications to the FDA in August.

Juul has spent “well over” the US$125 million it had said it would spend on the FDA process in a June court filing, the person familiar with its plans said.

Juul has anticipated the regulatory review for years. The company began shifting its focus squarely on the FDA application process last year, when in September it hired Croshwaite, a longtime Altria Group Inc. executive, as its new CEO. The company brought in another Altria veteran, Joe Murillo, as its chief regulatory officer in October.

In an email to employees announcing Murillo’s hire, Crosthwaite said his primary focus would be taking Juul through the FDA approval process, according to a person familiar with the matter.

Since joining Juul, Murillo has created a new regulatory team, bringing in employees from its clinical and scientific affairs, government affairs, legal and communications groups focused on preparing and filing the FDA application, the person said.

Altria poured US$12.8 billion into Juul in December 2018, but in recent months the Marlboro cigarette maker has reduced the value of its position by nearly two-thirds, to about US$4.2 billion. Last week, the company said it would focus primarily on helping Juul with its FDA application, while reserving the right to seek to approval for its own vaping products.

Crosthwaite has been spending a considerable amount of time in Washington. In his roughly four months at the helm, Crosthwaite was called with other vaping executives to the White House for a meeting with President Donald Trump on flavored vaping regulations, and he will testify on Capitol Hill on Wednesday to a panel that’s investigating the e-cigarette industry.

Crosthwaite will appear before a House Energy & Commerce subcommittee hearing on vaping and public health. In testimony prepared for the hearing, Crosthwaite said Juul will submit findings from more than 100 toxicological, clinical and behavioral studies to the FDA.