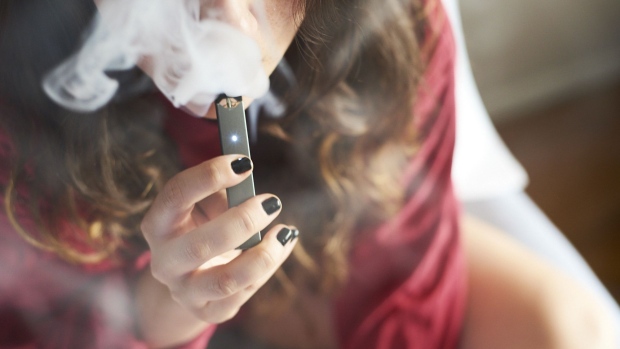 A person smokes a Juul Labs Inc. e-cigarette in this arranged photograph taken in the Brooklyn Borough of New York, U.S., on Sunday July 8, 2018. Juul Labs, the maker of the popular e-cigarette brand that has recently come under fire from health officials over its popularity with young adults, plans to introduce a line of lower-nicotine pods. The company will begin to sell pods with a 3-percent nicotine concentration in its mint and Virginia tobacco flavors later this year, according to a statement Thursday. , Photographer: Bloomberg/Bloomberg

The Food and Drug Administration denied authorization to Juul Labs Inc. for all of its products currently marketed in the US, dealing a substantial blow to a company that was briefly a darling among both tobacco giants and Silicon Valley investors.

The regulator said in a statement Thursday that the company must stop selling and distributing the products, and that those that are on the market must be removed or risk enforcement action. A rise in teenage use of vaping products had compelled the agency to conduct a thorough review of e-cigarettes, according to FDA Commissioner Robert Califf.

“The agency has dedicated significant resources to review products from the companies that account for most of the US market,” Califf said in the statement. “We recognize these make up a significant part of the available products and many have played a disproportionate role in the rise in youth vaping.”

Joe Murillo, Juul’s chief regulatory officer, said the company disagreed with the decision and would seek a stay as it determines what to do next. Juul is “exploring all of our options under the FDA’s regulations and the law, including appealing the decision and engaging with our regulator,” Murillo said in an emailed statement.

The FDA indicated that its rejection of Juul was based on data the company submitted regarding its products’ public-health benefits. According to the FDA, Juul’s application lacked sufficient evidence to show that allowing its products to be sold in the US would be appropriate for the protection of public health, and that some of the company’s study findings “raised concerns due to insufficient and conflicting data,” the agency said in its statement.

In response, Murillo said Juul believed that its applications “appropriately characterized the toxicological profile of Juul products, including comparisons to combustible cigarettes and other vapor products.”

Some Wall Street analysts said there was a chance that Juul could remain on store shelves pending an appeal. “We fully expect an appeal,” Owen Bennett, an analyst at Jefferies, wrote in a note, adding that he saw a reasonable chance that a stay is granted, “allowing them to remain on the market.”

Regulators had hoped that e-cigarettes would help adults quit smoking traditional tobacco products, which is a major cause of premature death. However, some public-health officials warned that the product is more popular among teenagers and that there are also health risks associated with vaping, such as acute lung-damaging illness.

The FDA’s decision sends the strongest possible message that Juul put the health of millions of young people at risk, Nancy Brown, chief executive officer of the American Heart Association, said in a statement Thursday. “We urge the FDA to take swift and severe enforcement action if the company defies the order,” Brown said.

Juul, more than any other product or company, has been responsible for creating and fueling the youth e-cigarette epidemic, Matthew Myers, President of the Campaign for Tobacco-Free Kids said in a statement. However, to truly put an end to the epidemic the FDA must clear the market of all flavored e-cigarettes, including menthol-flavored products, he added.

Once a richly valued startup, Juul has seen its fortunes decline in recent years after regulators cracked down on flavored e-cigarette products and lawsuits accused the company of marketing to underage users. The company has said that it never targeted youth in its advertising.

Shares of Altria Group Inc., which holds a 35 per cent stake in the company were up 1.1 per cent in New York trading on Thursday. The stock had slumped on Wednesday after the Wall Street Journal reported that the FDA was expected to reject Juul’s application for clearance. A spokesperson didn’t immediately respond to a request for comment.