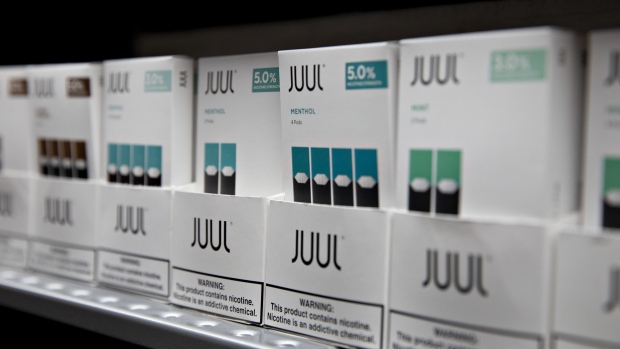 Menthol pods for Juul Labs Inc. e-cigarettes are displayed for sale at a store in Princeton, Illinois, U.S., on Monday, Sept. 16, 2019. Faced with a worsening epidemic of teenage vaping and a mysterious illness stalking users of cigarette alternatives, the Trump administration promised to ratchet up its oversight of a burgeoning but increasingly troubled industry. Photographer: Daniel Acker/Bloomberg , Bloomberg

(Bloomberg) -- Juul Labs Inc. said the US Food and Drug Administration bowed to political pressure by ordering the electronic-cigarette maker last week to remove its products from store shelves, and the company asked a federal appeals court to block the move while it fights the ban in court.

“If the Court does not intervene, JLI’s products will disappear from store shelves and politics will have won over sound science and evidence,” Juul said in a court filing Tuesday in Washington, D.C. The company claimed that the FDA held it to a different standard than competitors when analyzing data and used “deeply flawed” reasoning in rejecting Juul’s applications.

The FDA issued its order Thursday after a two-year scientific review prompted by a rise in teenage use of vaping products. Juul’s application to the agency lacked sufficient evidence to show that allowing its products to be sold in the US would be appropriate for the protection of public health, and some of the company’s study findings “raised concerns due to insufficient and conflicting data,” the FDA said.

In its court filing, Juul disputed the FDA’s claim that the company failed to provide aerosol data measuring the toxicological impact of four chemicals. Juul stated it provide 6,000 pages of data that showed none of those chemicals were found in the aerosol that customers inhaled. The company pointed to 110 scientific studies and more than 125,000 pages of data that showed the health benefits of its e-cigarettes.

San Francisco-based Juul said the FDA’s actions were part of a larger pattern of singling out the company. It pointed to the leak of the FDA’s order to the Wall Street Journal a day before its decision. The company argued that the FDA made its decisions after “immense political pressure,” from lawmakers. “One commentator even remarked that FDA had to deny JLI’s applications or risk significant budget cuts,” according to the filing.

Earlier, Juul persuaded the federal court to grant an emergency order blocking the FDA’s ban. In its request Tuesday, the company asked that the stay remain in place until the appeal is completed.