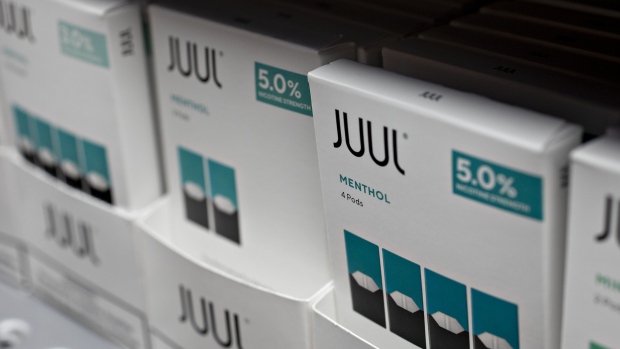 Menthos pods for for Juul Labs Inc. e-cigarettes are displayed for sale at a store in Princeton, Illinois, U.S., on Monday, Sept. 16, 2019. Faced with a worsening epidemic of teenage vaping and a mysterious illness stalking users of cigarette alternatives, the Trump administration promised to ratchet up its oversight of a burgeoning but increasingly troubled industry. Photographer: Daniel Acker/Bloomberg , Bloomberg

(Bloomberg) -- Juul Labs Inc. reached a settlement of more than 5,000 lawsuits blaming the company for a youth vaping epidemic across the US.

As part of the accord, the embattled e-cigarette maker isn’t allowed to immediately disclose the settlement amount, the company said in a statement, adding that the accord will be funded with an equity investment.

“These settlements represent a major step toward strengthening Juul Labs’ operations and securing the company’s path forward to fulfill its mission to transition adult smokers away from combustible cigarettes while combating underage use,” according to the statement.

The sprawling Juul litigation in San Francisco federal court included about 3,234 personal injury suits and more than 1,313 complaints brought by government entities and native Indian tribes, in addition to a proposed class-action fight, according to a recent court filing.

Juul is grappling with declining sales stemming from restrictions on flavored vape products by the Federal Drug Administration and health officials calling for increased warnings on the health effects of vaping.

The company reached an agreement in principle in September to pay $438.5 million to 33 states to resolve a two-year bipartisan probe into its marketing and sales practices, particularly claims that it marketed addictive nicotine products to children.

The first jury trial among the San Francisco cases was set for January after multiple delays. Juul co-founders Adam Bowen and James Monsees, who were crowned e-cigarette billionaires after Marlboro maker Altria Group Inc. acquired about a third of their company in 2018, were expected to take the witness stand alongside a few Altria executives.

“The scope of these suits is enormous,” said Sarah London, one of the lead lawyers for the plaintiffs. “These settlements will put meaningful compensation in hands of victims and their families, get real funds to schools for abatement programs, and help government and tribal entities prevent youth use of e-cigarettes across the US.”

--With assistance from Rachel Butt.