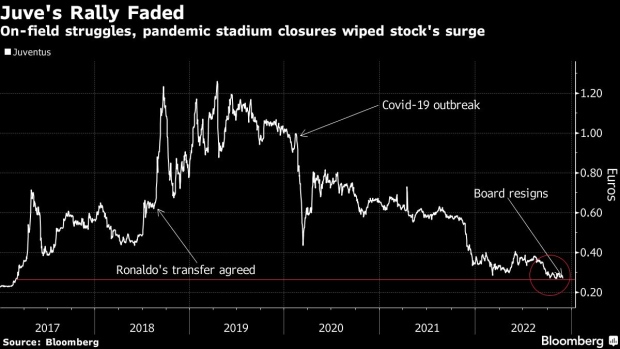 (Bloomberg) -- John Elkann underscored his role as the dominant figure of the billionaire Agnelli family, stepping in to wrest control of the Juventus Football Club SpA away from a relative.

Andrea Agnelli resigned as chairman of the Turin-based club late Monday along with the rest of the board. The upheaval was the culmination of months of tensions after Italian prosecutors and regulators alleged accounting wrongdoing. The move bears Elkann’s handprint and comes just before the 46-year-old’s annual presentation to investors in the family’s listed holding company Exor NV on Wednesday.

“The new Juventus board will include technical, legal high-level figures,” Elkann said in a statement, adding he’s confident the team will be able to demonstrate it always acted correctly.

The grandson and anointed heir of former patriarch Gianni Agnelli has taken a hard-nosed approach to the family’s portfolio. His crowning achievement was merging the Fiat auto business -- the wellspring of their wealth -- with France’s Peugeot to create Stellantis NV in 2020.

Juventus looks like it could be less flashy after the overhaul. The chairman role is being handed to Gianluca Ferrero, an accountant and corporate adviser instead of another Agnelli. Ferrero also holds positions at shipbuilder Fincantieri SpA and coffee company Luigi Lavazza SpA.

The reboot of Juventus indicates a more sober, Elkann-like approach. The new board candidates will all be veteran accountants and lawyers, according to people familiar with the plans. Instead of trophies, their main task will be to protect the company and resolve the investigations, said the people, who asked not to be identified because the discussions are private.

The soccer club’s shares slumped as much as 10% before paring the day’s declines. Juventus has lost over €1 billion ($1 billion) in market value since 2019.

Juventus was rocked by allegations of inflating the transfer value of its players to create fictitious capital gains. Its offices were searched last year by Italian financial police.

The team, which has denied wrongdoing, is under investigation by Turin prosecutors for false financial disclosures and obstructing public supervisory authorities. Italy’s market regulator Consob has also put the team under review.

Spain’s La Liga reacted to the board overhaul by calling for Juventus to be penalized. The top Spanish football league will ask the sport’s European governing body UEFA and Italy’s Serie A to immediately impose sanctions in the form of point deductions or financial constraints, people familiar with the situation said.

It’s not Juventus’ first brush with controversy. The team was relegated to Italy’s second division in 2006 after a match-fixing scandal. Juventus has since recovered to past success on the field in Italy.

Starting in 2010, the team won nine consecutive Italian titles, also known as “Scudetti,” under the leadership of Andrea Agnelli. But the team’s reputation suffered after his attempt at leading the so-called European Super League, a project that crumbled just days after its launch as teams pulled out after drawing ire from fans, politicians and sport officials.

Juventus has failed to win a European tournament for decades. In an attempt to compete with other top clubs, it poached Portuguese star Cristiano Ronaldo from Real Madrid in 2018 for more than €100 million but continued to fall short. He was transferred to Manchester United three years later, and the deal led to a hit of about €14 million on Juventus’s financial results in 2020-2021 financial year.

Alongside the radical cleanup at Juventus, which has been one of the family’s marquee assets for decades, a shakeup took place at Ferrari NV’s Formula 1 team. The supercar maker, which is also controlled by the Italian industrial dynasty, accepted the resignation of Team Principal Mattia Binotto, who has led the Ferrari team since 2019.

The announcement ended weeks of speculation about his future after he failed to bring the world title back to Ferrari. The brand, which was founded soon after World War II, last won the driver championship in 2007.

The Agnellis wealth stems from founding automaker Fiat nearly 125 years ago. Under Elkann, who has led the family’s business interests since 2004, their assets have been diversified away from autos, though they’re still the largest single investor in Stellantis and control truck maker CNH Industrial NV.