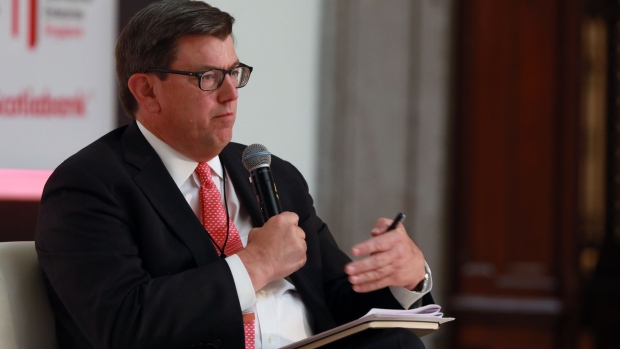 Patrick Ottensmeyer, president and chief executive officer of Kansas City Southern, speaks during the Latin American Cities Conference in Mexico City, Mexico, on Tuesday, May 23, 2017. The Latin American Cities Conference "Mexico and North America: A Global Power House," organized by Americas Society/Council of the Americas, main topics of discussion will include the future of NAFTA as well as the opportunities for deeper North American integration. , Bloomberg

(Bloomberg) -- Kansas City Southern suspended its forecast after reporting earnings that missed analysts’ expectations because of delays in Mexico, prompting the railroad’s boss to fire off a missive to the government.

A sudden change to regulations for facilities that store imported gasoline caused such shipments to drop 18% in the third quarter from a year earlier and delays clogged Kansas City Southern’s switching yards, Chief Executive Officer Pat Ottensmeyer said Tuesday on a conference call with analysts.

The railroad, which has agreed to be purchased by Canadian Pacific Railway Ltd. for $27 billion, also grappled with striking teachers who blocked its main line to a major port in southern Mexico, wiping out $25 million in revenue. The company reported a profit of $2.02 a share, while analysts expected $2.06.

Ottensmeyer said he wrote to Finance Minister Rogelio Ramirez de la O warning that the country faces “substantial” economic loss from the blocked tracks. Protests flare up now and again in Mexico but have gotten worse this year, the CEO said.

“The fact remains that the tracks aren’t cleared. The teachers haven’t been removed,” he said. “We need the government to enforce the law and remove the protesters and the blockage of our property.”

Ottensmeyer said he remains confident that Mexico’s antitrust regulator will approve the Canadian Pacific merger. Although the agency is “challenged with staffing and resources” that may slow approval, the deal is still on track to close in the second half, he said.