In less than a year, Kansas City Southern has transformed from an industry wallflower to the belle of the ball, getting courted by Canada’s two biggest railroads.

The U.S. carrier has been a source of takeover speculation for decades. Regulators even smoothed the path to some degree. But nothing clicked until Canadian Pacific Railway Ltd. last month agreed to purchase Kansas City Southern for US$25 billion, only to be topped Tuesday with a US$30 billion offer from Canadian National Railway Co.

Several factors fueled the change. For one, the U.S., Canada and Mexico strengthened economic ties last year by reworking a quarter-century-old trade pact. Meanwhile, recovery from the COVID-19 pandemic has gained pace, and U.S. manufacturers bruised by sluggish supply-chains with Asia began looking to Mexico for sourcing.

“All those forces -- the vaccines helping to open things up again, an economy gaining steam, and presumably less opposition from the Biden administration -- help make CP more confident in their bid,” said former railroad merger analyst Scott Rostan, the chief executive officer of Training the Street, an educational service for financial professionals. 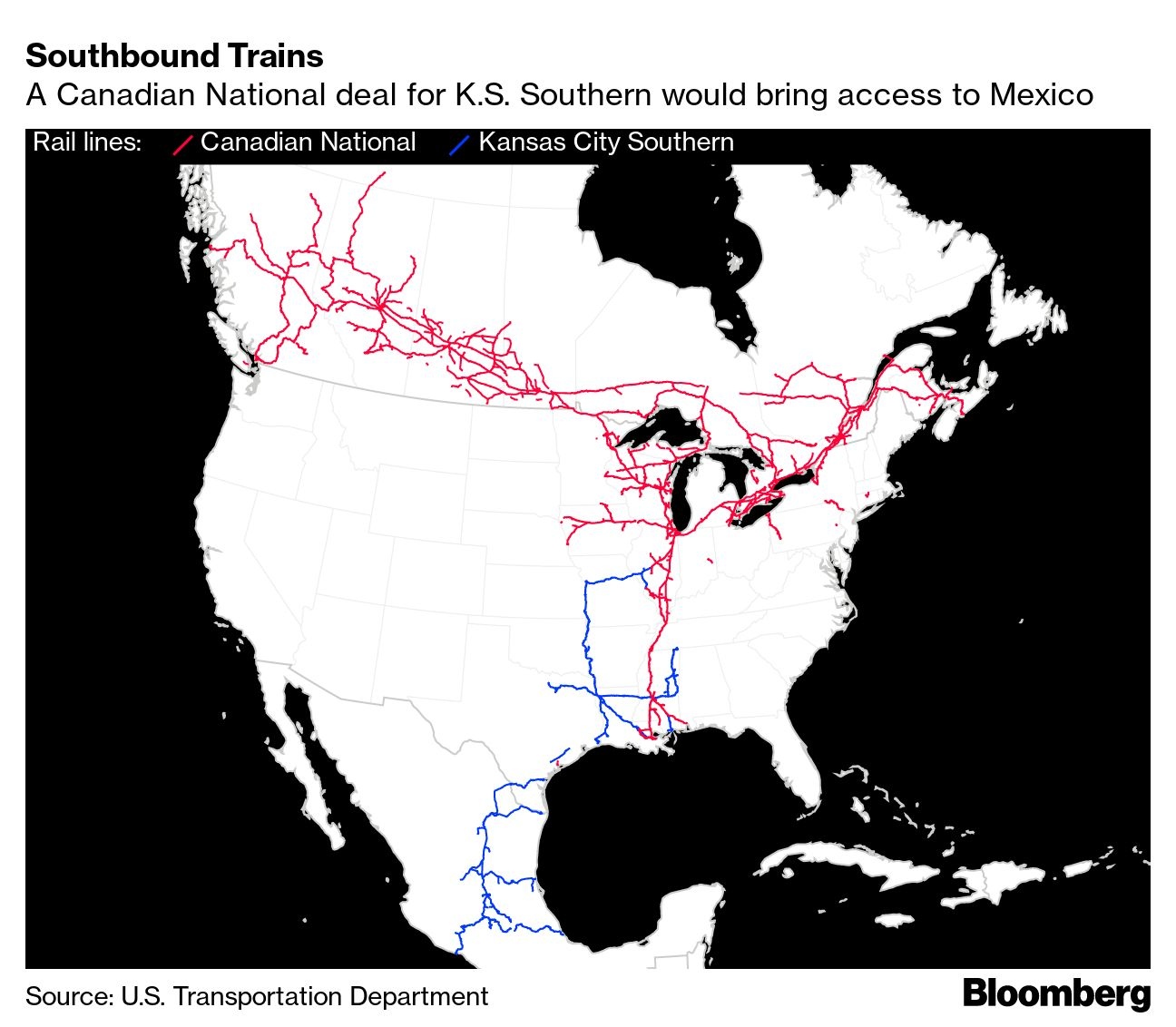 The key to Kansas City Southern’s allure lies in its oddball status. Its lines run north-south when all its major peers move freight mostly east-west.

Kansas City Southern was the only U.S. railroad to expand into Mexico, during a flurry of industry acquisitions in the two decades after deregulation in 1980, with its 1997 purchase of a government-run railroad through the heart of industrial Mexico. Half of the Kansas City, Missouri-based railroad’s revenue now comes from south of the U.S. border.

That carries a fair amount of risk -- witness Trump’s saber rattling with Mexico. Even though U.S. regulators in 2001 exempted Kansas City Southern, the smallest of the seven major North American railroads, from stricter rules meant to cool down mergers, no suitor came calling. That de facto ban came after a string of deals and ended a bid by BNSF Railway to buy Canadian National.

Another factor is that major railroads appeared reluctant to set off another costly acquisition binge. Mexico’s political instability and the threat of currency devaluation also gave would-be purchasers pause. Industry legend Hunter Harrison, who had run several North American railroads, said he had shunned Kansas City Southern because of complications with doing business in Mexico. 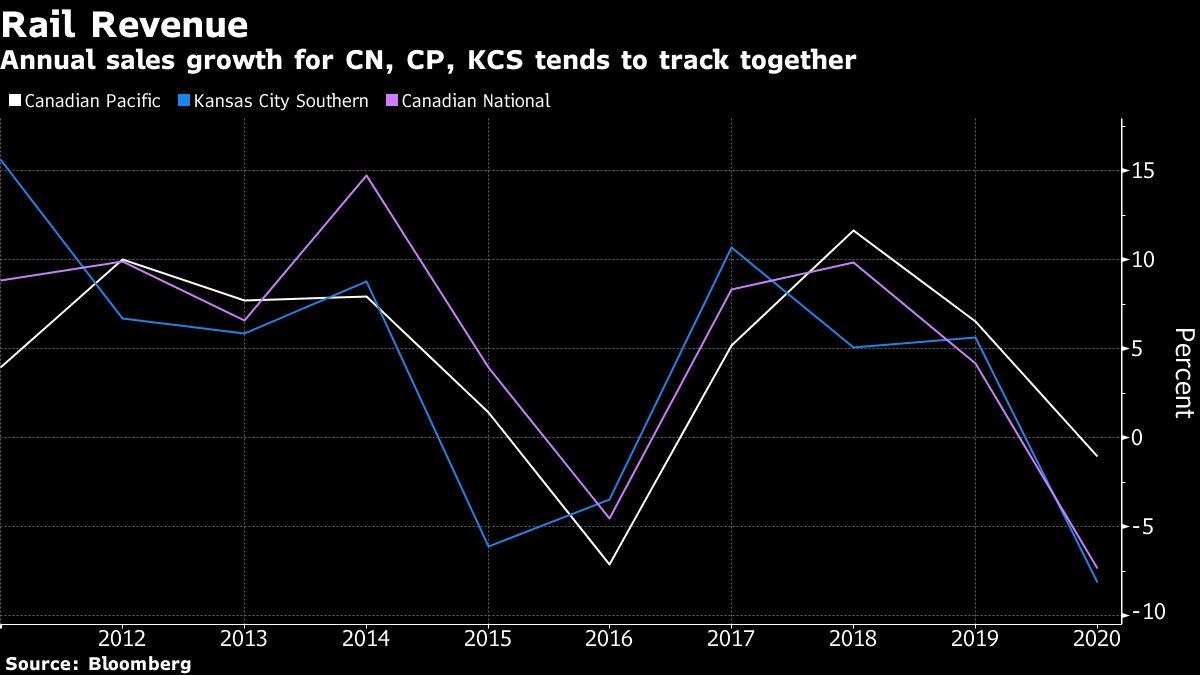 Today, though, the Mexican economy offers the prospect of fast economic growth and added cargo volume.

For Canadian Pacific CEO Keith Creel, Kansas City Southern would give his railroad a link to U.S. ports on the Gulf of Mexico that archrival Canadian National secured in a 1998 acquisition. In a three-page letter to Kansas City CEO Pat Ottensmeyer today, Creel said his rival could have made a bid last year when private-equity firms tried and failed to buy Kansas City, but only pulled the trigger after Canadian Pacific’s proposal.

“In light of the serious regulatory risks that CN’s proposal would face, we question whether CN is serious about the proposal to acquire KCS,” Creel said in the letter.

Kansas City Southern would also make either suitor the only railroad with operations in the U.S., Canada and Mexico. Both see a deal revving up sales by converting more truck cargo to rail, which is cheaper and more fuel efficient for customers.

Kansas City Southern “is the ideal partner for us and at the right time,” Ruest told analysts Tuesday.

Canadian Pacific will probably sweeten its bid to avoid being cut off from the U.S. Gulf Coast and to prevent its biggest competitor from becoming even larger and stronger, said railroad consultant Tony Hatch.

“CP could go higher,” he said. “But, CN didn’t raise this by a dollar. It was a pretty definitive statement.”

And Canadian National could win by losing. Either it nabs the prize or forces its rival to pay more, said Rostan, the former Wall street merger analyst.

“Their strategy may be, ‘Let’s put in an offer that is credible and that’s going to make our smaller, less financially sound competitor stretch,’” he said.

Regardless of who wins, the wallflower won’t come cheap. Kansas City Southern’s shares are trading at about 42 times earnings, while all major railroads in North America trade at less than 30 times.

“There is a point at which you pay too much for the growth,” Hatch said. “We haven’t hit that level yet.”