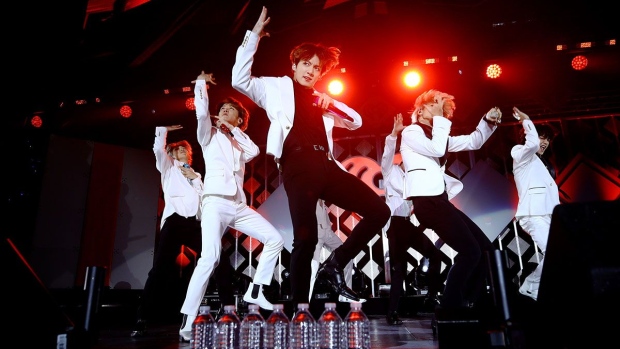 INGLEWOOD, CALIFORNIA - DECEMBER 06: (EDITORIAL USE ONLY. NO COMMERCIAL USE.) (L-R) RM, J-Hope, Jungkook and Jimin of BTS perform onstage during 102.7 KIIS FM's Jingle Ball 2019 Presented by Capital One at the Forum on December 6, 2019 in Los Angeles, California. (Photo by Rich Fury/Getty Images for iHeartMedia) , Photographer: Rich Fury/Getty Images North America

(Bloomberg) -- Big Hit Entertainment Co., the manager of K-pop boy band BTS, is looking to raise as much as 962.6 billion won ($812 million) in a South Korean initial public offering that is set to be the country’s largest in three years.

Big Hit set the price range for sale of 7.13 million new shares at 105,000 won to 135,000 won each, according to a statement filed on Wednesday. At the top of the range it would have a market capitalization of 4.6 trillion won ($3.9 billion), based on the number of common shares.

Big Hit and BTS have helped popularize K-pop, adding to the rising global visibility of Korean entertainment including TV dramas popular across Asia and films like “Parasite,” the winner of this year’s Academy Award for best picture. BTS’s “Dynamite” topped the Billboard’s Hot 100, the first Asian act to be No. 1 on the U.S. Music chart since Kyu Sakamoto’s “Sukiyaki” held the No. 1 spot for 3 weeks in 1963.

The IPO will test investor appetite for K-pop, given that shares of listed rivals SM Entertainment Co., home to boy band EXO, had slumped some 43% this year through June lows given concert cancellations due to the coronavirus pandemic. The shares have since recovered and are now down 3% this year.

Big Hit said in 2017 it was considering a listing and has since built the seven-member ensemble into one of the world’s top live draws, grossing $170 million in 2019, ranking it fifth, just behind Elton John, according to concert trade publication Pollstar.

Big Hit’s will also help galvanize the IPO market in South Korea, which had been suffering from low listing volumes in recent years. Some $2.81 billion has been raised through first-time share sales this year, inching closer to the $3.38 billion that was fetched in all of 2019, data compiled by Bloomberg show.

Earlier this year SK Biopharmaceuticals Co. raised $784 million in what was then the largest Korean IPO in three years. Kakao Games, a unit of Kakao Corp., is set to list on Kosdaq next week, having raised 384 billion won in its offering. The deal drew about 59 trillion won bids from retail investors, according to Yonhap News.