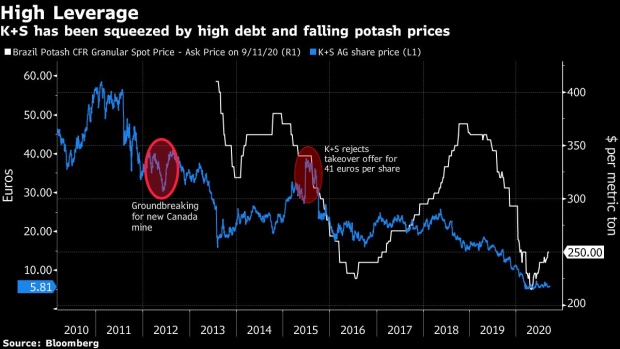 (Bloomberg) -- German fertilizer company K+S AG is in advanced talks to sell its Morton Salt unit to Kissner Group for about $3 billion, people with knowledge of the matter said.

A deal for the North American salt business, famous for its “Umbrella Girl” logo, could be announced as soon as this week, according to the people, who asked not to be identified because the information is private.

No final agreements have been reached, and talks could still be delayed or fall apart, the people said. A representative for K+S declined to comment while Kissner and Cerberus didn’t immediately respond to requests for comment.

Kassel, Germany-based K+S is divesting assets after its bet on a Canadian potash project backfired during a global slump in prices for the crop nutrient. This has weighed on earnings and sent the company’s credit rating into junk territory. Shares of K+S have fallen 45% in Frankfurt trading this year, giving it a market value of about 1.2 billion euros ($1.4 billion).

The company acquired Morton Salt in 2009 for about $1.7 billion.

K+S said in March it aims to cut its net debt by more than 2 billion euros by divesting the salt unit and trimming corporate functions. An earlier plan proposing the sale of just a minority stake in the business failed, meaning K+S was forced to give up a stable earnings contributor.