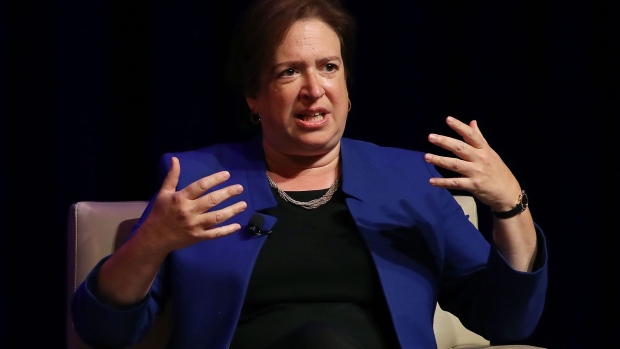 (Bloomberg) -- In a 6-3 ruling, the US Supreme Court restricted the Environmental Protection Agency’s authority to curb greenhouse gases from power plants, dealing a blow to President Joe Biden’s climate-change agenda.

Read the full decision and the dissent here.

The decision interpreting the the US Clean Air Act sided with coal-mining companies and Republican-led states, and it limits the EPA’s tools to cut emissions at a time when climate change is causing rising sea levels and more extreme weather patterns. The ruling could also have a broad impact and affect other regulatory agencies.

Writing for the majority, Chief Justice John Roberts said Congress needs to more explicitly give the EPA the power to try to shift power generation to cleaner sources:

Capping carbon dioxide emissions at a level that will force a nationwide transition away from the use of coal to generate electricity may be a sensible “solution to the crisis of the day.” But it is not plausible that Congress gave EPA the authority to adopt on its own such a regulatory scheme in Section 111(d). A decision of such magnitude and consequence rests with Congress itself, or an agency acting pursuant to a clear delegation from that representative body

In the dissent, Justice Elena Kagan slammed the decision that the EPA didn’t have enough authority to shift energy generation:

This is not the Attorney General regulating medical care, or even the CDC regulating landlord-tenant relations. It is EPA (that’s the Environmental Protection Agency, in case the majority forgot) acting to address the greatest environmental challenge of our time.

The subject matter of the regulation here makes the Court’s intervention all the more troubling. Whatever else this Court may know about, it does not have a clue about how to address climate change. And let’s say the obvious: The stakes here are high. Yet the Court today prevents congressionally authorized agency action to curb power plants’ carbon dioxide emissions. The Court appoints itself—instead of Congress or the expert agency—the decisionmaker on climate policy. I cannot think of many things more frightening.