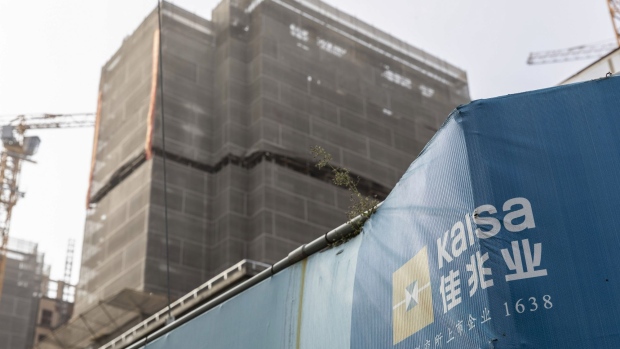 Kaisa Group Holdings Ltd.'s Future City development under construction in Shanghai, China, on Tuesday, Nov. 30, 2021. The newfound stability in Chinese dollar bonds will be tested this week as Kaisa Group announces whether creditors agreed to swap $400 million of dollar notes in a move designed to avert default. , Bloomberg

The firm had sought to exchange its $400 million of dollar notes maturing Dec. 7 for new ones due 18 months later. The offer to exchange the notes failed to meet the required 95% approval rate, according to a statement from the company

Kaisa, which became China’s first developer to default on dollar debt in 2015, now risks once again reneging on its obligations. A crisis at the company could spur contagion risk just as global investors return to offshore property bonds. Kaisa is the nation’s third-largest issuer of dollar notes among property firms, with some $11.6 billion outstanding.

“To ease the current liquidity issue and reach an optimal solution for all stakeholders, the company is assessing and is closely monitoring the financial condition and cash position of the group,” a stock exchange filing from the firm said on Friday. “It will explore feasible solutions (including but not limited to renewal and extension of borrowings and disposing of assets).”

The company previously said it may not be able to repay bonds and could consider a debt restructuring if its exchange offer didn’t gain support. A failure to repay the principal on the notes at maturity would be considered a default, according to the bond’s offering circular. That would also risk triggering cross default on its other debt.

Other developers have been scrambling to avoid default by seeking to extend payment deadlines in recent weeks. Prohibitively high borrowing costs in the offshore credit market are making it near-impossible for many firms to refinance their dollar debt. A Yango Group Co. unit successfully swapped three dollar notes for bonds offering a personal guarantee by the firm’s chairman last month.

Kaisa’s exchange plan failed to address the question of the firm’s broader debt obligations, particularly for its offshore notes which make up the vast majority of its public bonds.

The 30-day grace period for interest payments due last month on two dollar notes expires next week, while the firm has $2.8 billion in offshore notes maturing in 2022. That includes a $550 million bond due April.