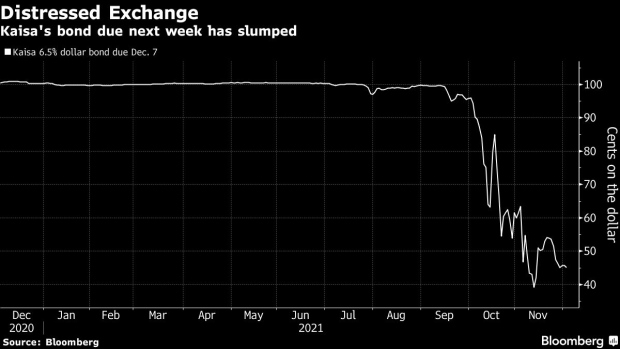 (Bloomberg) -- One of China’s largest issuers of junk dollar debt will announce Thursday whether creditors agreed to a debt swap designed to avert default.

Kaisa Group Holdings Ltd., which became the first Chinese developer to default on such bonds in 2015, is trying to stave off another collapse that could come as soon as next week. The company’s offer to exchange some of its $400 million of dollar notes maturing Dec. 7 for new ones due 18 months later expires at 4 p.m. London time.

If the offer -- which requires a 95% approval rate -- fails to win support, the firm has said it may not be able to repay bonds and could consider a debt restructuring. Kaisa has some $11.6 billion in dollar debt outstanding. That means a potential default risks spurring selling in the broader high yield market.

China’s central bank will keep funding conditions steady as the year-end approaches, according to a report in the China Securities Journal which cited market experts. The People’s Bank of China is likely to roll over the medium-term lending facility in December, the report said.

A 950 billion yuan ($149 billion) maturity in December is a consequence of action taken last year to calm financial markets following a series of defaults by state-owned companies. Click here for a table showing the net position of cash liquidity of People’s Bank of China.

Seazen Group Ltd.’s shares will resume trading Thursday. The developer plans to issue as many as 296.2 million rights shares at HK$5.30 apiece on the basis of one for every 21 existing shares, according to an exchange filing.

The offer price represents about 5.6% discount to the theoretical ex-rights price, based on the last close of HK$5.63.

CST Group Ltd. said one of its units has disposed of China Evergrande Group notes in the secondary market. The Hong Kong-based investment group said it will to record a loss of about $21.6 million for the financial year ending March 2022 as a result of the disposals.