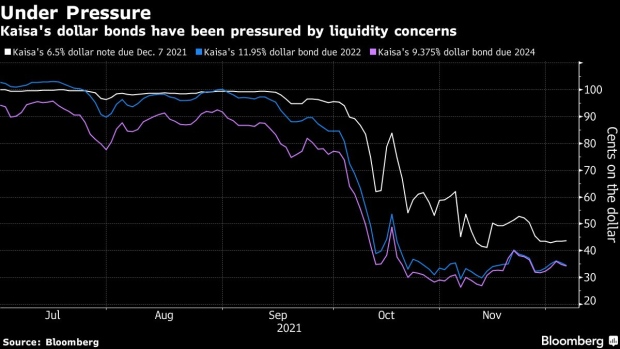 (Bloomberg) -- A group of Kaisa Group bondholders is close to signing non-disclosure agreements with the company in a move that would pave the way for discussions around a financing deal as creditors have yet to get paid on a $400 million dollar bond that was due to mature Tuesday.

The lack of payment puts Kaisa on the brink of becoming the second major Chinese developer to renege on debt obligations this week, as China Evergrande Group looks poised to begin a process of overhauling its balance sheet without a government bailout. S&P Global Ratings said Tuesday that an Evergrande default “looks inevitable.”

Hopson Development Holdings proposed to issue $250 million of 8% guaranteed convertible bonds due 2022. The initial conversion price is at HK$20.16, representing a premium of 4.56% over the last close at HK$19.28.

A group of Kaisa bondholders is close to signing non-disclosure agreements with the property developer in a move that would pave the way for discussions around a potential financing deal for the beleaguered firm, people with knowledge of the matter said.

The creditor group is being advised by Lazard Ltd. An announcement about the agreements could come as early as Thursday morning in Hong Kong, one of the people said. Lazard is seeking more bondholders to join the group.

A representative for Kaisa didn’t immediately respond to a request for comment placed outside of normal business hours.