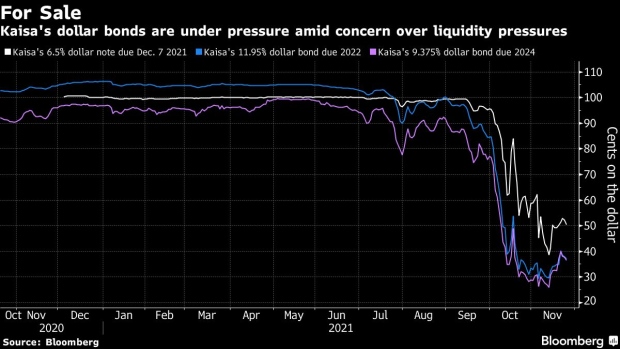 Workers walk past Kaisa Group Holdings Ltd.'s City Plaza development under construction in Shanghai, China, on Tuesday, Nov. 16, 2021. At least some of Kaisa's creditors haven't received bond interest that was due last week, according to people with knowledge of the matter, starting the clock on a 30-day grace period before a default. , Bloomberg

The builder has offered to exchange at least 95% of its $400 million 6.5% note maturing Dec. 7 for new notes with the same coupon maturing June 2023. If the offer to bondholders fails, the developer may not be able to repay bonds and could consider a debt restructuring, it said in a stock exchange filing on Thursday.

Kaisa is the latest real estate firm trying to shore up its finances as a debt crisis originally centered on China Evergrande Group engulfs the industry. The liquidity crunch follows a government campaign to reduce leverage in the sector, and has been made worse by a slump in home sales and prices.

“Despite our efforts to reduce our interest-bearing debt in response to government regulations, the current sharp downturn in the financing environment has limited our funding sources to address the upcoming maturities,” Kaisa said in the statement.

Kaisa is one of China’s largest issuers of high-yield dollar bonds, with more than $11 billion of notes outstanding. Its 2021 bond is indicated at 50.6 cents on the dollar, Bloomberg-compiled prices show. Kaisa has another $2.8 billion in dollar bonds coming due next year, including a $550 million note in April.

The statement came hours after Kaisa announced plans to resume trading of its stock on Thursday, repay overdue wealth management products and speed up the disposal of real estate projects and “high-quality assets.”

Kaisa’s Hong Kong-listed shares were halted on Nov. 5 pending an announcement containing inside information. The company has put 18 projects in Shenzhen up for sale, with a total value estimated at 81.8 billion yuan ($12.8 billion), Bloomberg reported at the time.

A set of Kaisa Group Holdings offshore bondholders has hired advisers, according to people with knowledge of the situation. Like Evergrande, Kaisa is contending with individuals demanding repayments of overdue wealth management products. The company has guaranteed such products, which have 12.8 billion yuan outstanding in principal and interest, local media reported earlier this month.

About 1.5 billion yuan in wealth products tied to the Kaisa group and its associates became due in October and November, the company said in the statement Wednesday. Kaisa is implementing measures to pay back about 1.1 billion yuan of the wealth products, it said. These include paying 10% of the principal on the month that they come due, and a further 10% every three months thereafter.