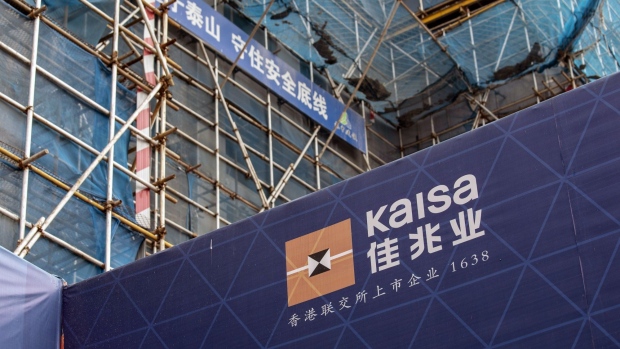 Kaisa Group Holdings Ltd.'s City Plaza development under construction in Shanghai, China, on Tuesday, Nov. 16, 2021. At least some of Kaisa's creditors haven't received bond interest that was due last week, according to people with knowledge of the matter, starting the clock on a 30-day grace period before a default. Photographer: Qilai Shen/Bloomberg , Bloomberg

(Bloomberg) -- Chinese property developer Kaisa Group Holdings Ltd. has put its last fully-owned Hong Kong project up for sale as the company rushes to shore up its finances to avoid a default.

The firm is selling a project in the Sai Ying Pun area for around HK$500 million ($64.1 million), according to a person familiar with the matter, who requested anonymity discussing private information. The asking price is below the 501 million yuan (78.4 million) Kaisa paid for it in May last year.

Kaisa has sold a slew of assets in Hong Kong, reversing a more than $1 billion spending spree last year. The builder is asking creditors to swap at least $380 million of bonds maturing Dec. 7, and has said it may not be able to repay the notes if the offer fails.

On Thursday, Hong Kong developer Far East Consortium International Ltd. announced that it would acquire a land site in Kai Tak area for HK$7.9 billion with New World Development Co. Kaisa had a 50% stake in the site.

The Shenzhen-based developer is one of the latest real estate firms in the country trying to raise cash as the debt crisis originally centered on China Evergrande Group engulfs the sector. The liquidity crunch follows a government campaign to reduce leverage in the industry, and has been exacerbated by a slump in home sales and prices.