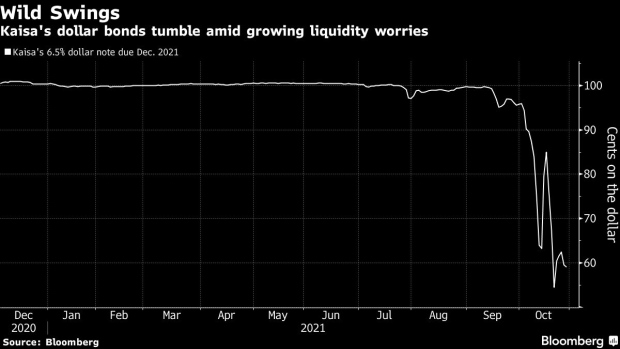 Signage on a glass wall in the communal kitchen at Kaisa Group Holdings Ltd.'s Home of Creator residential development in Shenzhen, China, on Saturday, Nov. 21, 2020. Rising from a tiny fishing village to a metropolis of about 22 million people in four decades, Shenzhen is a beacon for young workers dreaming of becoming the next Jack Ma, or at least joining the middle class. Yet the boom has led to the highest property prices and lowest home ownership rates in China, a warning for the country’s other growing cities. Photographer: Yan Cong/Bloomberg , Bloomberg

(Bloomberg) -- Kaisa Group Holdings Ltd. shares tumbled along with its bonds after two rating agencies downgraded the Chinese developer amid concern over the company’s ability to refinance dollar debt.

Both S&P Global and Fitch Ratings downgraded their ratings by two notches on Kaisa to CCC+ from B on Wednesday. The company has a $400 million note due on Dec. 7, and $2.8 billion of dollar bonds maturing in 2022, according to data compiled by Bloomberg. That’s on top of about $1.1 billion of interest payments for next year.

“The negative outlook reflects Kaisa’s sizable and concentrated offshore bond maturities over the next 12 months, and the company’s diminishing liquidity,” S&P analysts including Aeon Liang wrote in a report dated Wednesday. “We view the company’s capital structure as unsustainable amid challenging operating conditions and a tight funding environment.”

Kaisa is notable for being the first Chinese developer to default on a dollar bond, back in 2015. Its bonds and shares fell earlier this month after the company canceled meetings with some investors.

Chinese real estate firms with the worst balance sheets are getting crushed by a spike in borrowing costs, a phenomenon that’s intensifying this month as bills come due. At least four developers have defaulted in October. After a brief rebound last week, spreads on high-yield debt over comparable Treasuries have widened to near record levels. That makes refinancing upcoming maturities prohibitively expensive.

The company will need sell assets to help avoid default, although such sales may not be completed in time to cover bond maturities, the analysts wrote. Kaisa will need to manage a further $2.2 billion-$3 billion of offshore maturities per year over 2023-2025, according to S&P.

Fitch attributed its downgrade to Kaisa’s “limited” funding access and uncertainty over the refinancing of its dollar bonds given volatility in capital markets, according to analysts including Edwin Fan.

Moody’s Investors Service lowered its rating Kaisa to B2 from B1 earlier this month, citing concern over weakening liquidity and increased refinancing risk.