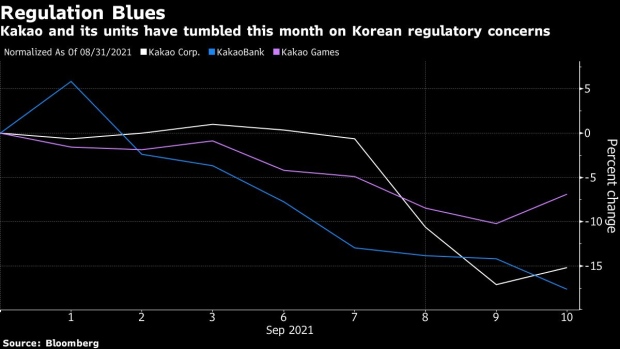 The Kakao Corp. KakaoTalk app arranged on a smart phone in Gimpo, South Korea, on Thursday, Sept. 9, 2021. Kakao and Naver Corp. plummeted, set for the biggest declines in years, after South Korean lawmakers warned the nation’s internet giants against abusing their market dominance in the pursuit of profits. Photographer: SeongJoon Cho/Bloomberg , Bloomberg

(Bloomberg) -- Kakao Corp. and its listed subsidiaries have lost more than $16 billion in market value this month as South Korea ramps up its own version of tech crackdowns.

Kakao itself has shed nearly $10 billion as foreign and local institutional investors dumped the stock after prominent lawmakers called the nation’s biggest messaging and social media service a “a symbol of greed.”

Shares of the company -- whose empire also includes online shopping, payments, ride-hailing and other services -- dropped about 17% over the past two sessions before rebounding on Friday. Kakao had surged more than sixfold since a pandemic low in March last year to a record high in June, boosted by the stay-at-home demand and the listing of its subsidiaries.

As in China, where a regulatory crackdown on tech giants has wiped out more than $1 trillion in market value from some of the largest names, one area of focus has been on fintech in Korea. Seoul regulators are making efforts to protect consumers buying financial products online.

Kakao’s recently listed units KakaoBank Corp. and Kakao Games Corp. tumbled this week as well, and investors are concerned over the potential impact on the valuation for the upcoming initial public offering of Kakao Pay Corp. Meanwhile, platform rival Naver Corp. has taken a $4.5 billion hit to its market capitalization so far this month.

Still, sell-side anlaysts remain optimistic on the long-term growth outlook for Korea’s internet stocks. Some say the selloff should be short term while the introduction of new consumer protection measures will benefit the overall industry in the long run.

“Korea is more mature in terms of regulations than China, and the regulatory environment remains incrementally dovish,” Ro Seungjoo, an analyst at CLSA, wrote in a research note, maintaining a buy rating on Kakao. “The selloff leads to classic buying opportunities in our view.”