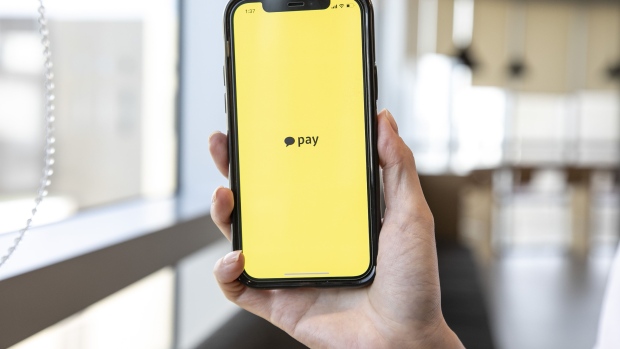 The Kakao Pay Corp. application on a smartphone arranged at the company's headquarters in Seongnam, South Korea, on Monday, May 24, 2021. Kakao Pay, South Korea’s largest online payment service with 36 million users, is seeking to raise as much as 1.63 trillion won ($1.4 billion) in an initial public offering in Seoul, following blockbuster IPO filings from Kakao Bank and Krafton Inc. this week. Photographer: Jean Chung/Bloomberg , Bloomberg

The stock’s surge of as much as 74% puts the capitalization of the retail lender without brick-and-mortar branches at more than 32 trillion won ($28 billion), bigger than the country’s traditional financial groups.

At its IPO price, KakaoBank was valued at 18.5 trillion won ($16.2 billion) even though its assets were less than a tenth of some of the country’s biggest retail banks.

KakaoBank’s share float was the biggest this year after Krafton Inc.. The developer behind the hit game PlayerUnknown’s Battlegrounds is scheduled to make its trading debut on Tuesday after floating $3.8 billion worth of shares.

“The current market capital appears to have overshot the expectations,” Kim In, an analyst at BNK Securities, said in a research note before its debut, initiating the coverage at a “sell” rating at a price target of 24,000 won, lower than the share floating price. “The reality is that there is a huge concern about the stock’s sharp fall.”

Many projects through its platform businesses are difficult to execute while its profit from those new businesses are meager, Kim said. Most of its profit comes from interest rates and loans, just like other traditional banks, he added.

KakaoBank is the latest company to go public among Kakao Corp.’s affiliates. Kakao Games Corp. raised 384 billion won in September and its shares soared around 250% since the IPO. Kakao Pay Corp., the country’s largest online-payments service, was seeking to debut on Aug. 12 but the listing was delayed after regulators asked it to revise its prospectus. More IPOs are likely to follow at Kakao as the ride-hailing, entertainment and Japan business units may go public.Kakao Bank was formed in 2016 after the Korean government offered online-banking permits for the first time in 2015. Its users grew quickly as the online bank has benefited from the parent company’s messenger service with 46 million active users out of a population of about 51 million.Although it’s leading the online bank industry, competition is rising in the country, which is aggressively adopting fintech services. Viva Republica Ltd. plans to launch Toss Bank as early as September as it received the country’s third Internet banking license while K Bank, which has amassed new users in the cryptocurrency space, raised 1.2 trillion won from shareholders including Bain Capital.