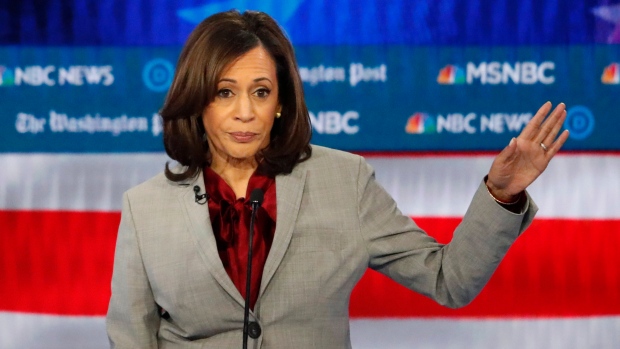 Kamala Harris suspended her presidential campaign on Tuesday after months of declining poll numbers as she struggled to define her candidacy, according to several people familiar with the matter.

Harris, a first-term senator from California, entered the race after making a name for her self as a tough questioner on the Senate Judiciary Committee during the Brett Kavanaugh and William Barr confirmation hearings. Those skills came from her record as the attorney general of California and a prosecutor, which she emphasized in her campaign to “prosecute the case” againsft President Donald Trump with slogans of “truth” and “justice.”

To my supporters, it is with deep regret—but also with deep gratitude—that I am suspending my campaign today.

But I want to be clear with you: I will keep fighting every day for what this campaign has been about. Justice for the People. All the people.https://t.co/92Hk7DHHbR

Harris had been closing campaign offices in New Hampshire and laying off campaign workers, as she said she was trying to focus her campaign on Iowa.

But one of the principal attributes that built her image as a formidable candidate — her reputation as a tough-on-crime prosecutor — ended up being a liability in the Democratic primary.

Voters were wary of her record as the attorney general of California and her thought-out retorts came across at times as canned lines. Her highest polling bump came after she confronted Joe Biden in the first debate in late June over his record on school busing. She jumped from about seven per cent to 15 per cent, but that surge had faded by the second candidate forum a month later.

As of Tuesday, she was polling at 3.4 per cent, in sixth place, in the Real Clear Politics aggregate of polls.

Her momentum also was stymied by policy bungles on health care and vague answers early on to voter questions, which fed the perception that she was running a campaign without a message as she attempted to walk the line between Biden’s pragmatism and the progressive approach of Elizabeth Warren and Bernie Sanders.

She initially said she favored ending private insurance through Medicare for All at a CNN town hall, and then backtracked, only to then raise her hand in the first debate indicating support for abolishing private health insurance. She backtracked again days later, stating she misunderstood the question. When asked for stances early on in the campaign she was criticized for frequently deflecting with “let’s have that conversation.”

In late October, short on cash and averaging five per cent in the polls, Harris said she would cut staff at her headquarters in Baltimore and redeploy field staffers from the early primary states to Iowa. The strategy shift came six weeks after Harris said her campaign would be focusing on Iowa.

She spent more in the third quarter than she raised and reported only US$10.5 million cash on hand by the end of September. She was the second-highest fundraiser behind Sanders in the first quarter, raising US$12 million, but as other candidates’ hauls rose hers stayed stagnant.

“She’s a first rate candidate and a real competitor and I have mixed emotions about it because she is really a solid, solid person.”

--With assistance from Tyler Pager.