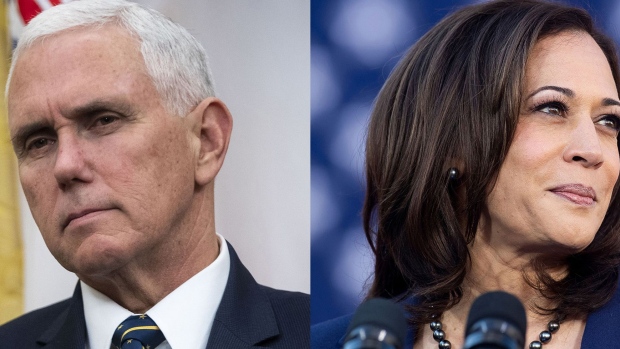 Mike Pence and Kamala Harris will take the stage Wednesday night under extraordinary circumstances that will elevate the oft-forgotten vice presidential debate to the highest-stakes running mate matchup in years.

With President Donald Trump fresh out of the hospital but still battling the coronavirus, both Pence and Harris will have to reassure voters that they can step into the presidency if either of the septuagenarians who top the tickets become incapacitated.

A week after Trump and Democratic nominee Joe Biden squared off in a combative and chaotic debate, Pence and Harris will meet at the University of Utah in Salt Lake City under dramatically different circumstances. Not only have the safety precautions become stricter since at least 10 people who live or work at the White House have become infected, but the tone is expected to be more civil as well.

The debate, which will start at 9 p.m. New York time on Wednesday, will be divided into nine discussion categories, each lasting about 10 minutes.

Although the Trump campaign opposed it, Harris’s staff won an argument to have a plexiglass shield separating her and Pence, who has tested negative for the virus that sent Trump to Walter Reed National Military Medical Center for three days. Harris’s campaign announced Tuesday that she also tested negative. The candidates will be a little more than 12 feet (3.7 meters) apart, and the moderator, Susan Page of USA Today, will also be that distance, the Commission on Presidential Debates said Monday.

Anyone who refuses to wear a mask will be “escorted out,” the commission said. The first family and some of Trump’s guests refused to wear masks at last week’s debate.

“This VP debate will get a lot more attention than they usually do,” said Charlie Black, a veteran Republican strategist. “So it’s an opportunity for both candidates. I actually expect a good debate. Pence does a good job of presenting the president’s case, his accomplishments and his ideas in a calm, measured manner. Harris has proved to be a good debater.”

The candidates are also less likely to sling the ad hominem attacks that highlighted the Sept. 29 debate in Cleveland between Trump and Biden. Harris will have to restrain the punches she used in her own presidential run.

She has re-upped some of her lines since joining the Biden ticket, including calling Trump a “predator.” But with the president just a day or so out of the hospital, she is expected to shelve those attacks. That doesn’t mean she’ll hold back on criticizing the administration for what Democrats say is a gross mismanagement of the pandemic, especially given that Pence leads the White House coronavirus task force.

“It’s the perfect microcosm for the failure of the Trump administration on coronavirus,” Democratic strategist Joel Payne said. “They became their own super spreader. They didn’t follow best practices. Harris can really effectively use this last week as exhibit A of why Trump and Pence are dangerous and shouldn’t be leading this country out of the crisis. It’s the perfect closing argument for prosecutor Harris.”

Payne cautioned Harris, 55, to use her rhetorical skills honed as district attorney in San Francisco and as California’s attorney general to balance being critical without making light of the 74-year-old president’s health concerns.

Pence, 61, is likely to continue the Trump campaign’s attacks of painting Biden and Harris as Trojan horses for the progressive wing of the Democratic Party and warning about a turn toward socialism. He is also expected to make the case that Trump is a better steward of the economy, the one issue where Trump still narrowly polls ahead of Biden.

“Kamala Harris is the most liberal member of the entire U.S. Senate and she serves to push Joe Biden even further to the left,” Tim Murtaugh, a Trump campaign spokesman said.

Pence isn’t often heard from, usually seen sitting or standing silently by as Trump commands the spotlight. His Republican convention speech in August was likely the last time many voters heard his voice. His career in politics and radio before that have made him a disciplined speaker and he employs a more traditional, formal delivery than his boss.

Harris has been practicing at Howard University in Washington, her alma mater. Former Democratic primary rival Pete Buttigieg, like Pence from Indiana, has been playing the vice president in mock sessions and is in Salt Lake City to help Harris.

When Biden chose Harris as his running mate, Democrats were eager to watch her debate Pence. She helped make a national name for herself with her incisive questioning of Supreme Court Justice Brett Kavanaugh and Attorney General William Barr during their confirmation hearings and is expected to play a leading role in the hearings next week to confirm Trump’s Supreme Court nominee, Amy Coney Barrett.

Yet in the weeks before the debate, Harris allies have sought to tamp down anticipation of her performance, pointing out the unique challenges of a vice presidential debate.

Even Harris herself has downplayed expectations.

“He’s a good debater. So, I’m so concerned, like I can only disappoint,” she said at a fundraiser last month.

For his part, Pence’s practice has been led by Marc Short, his chief of staff, and has included former Wisconsin Governor Scott Walker and former Florida Attorney General Pam Bondi, who has played Harris in mock debates, according to a person familiar with debate preparations.

Despite the president’s health scare, some strategists are still doubtful the vice-presidential debate will do much to change voters’ minds, especially when polls shows that fewer than 5 per cent of the electorate is undecided. Biden has held a steady lead in both national and battleground polls since the summer, and there does not seem much that Trump can do to flip the narrative.

“In an election cycle since Joe Biden has been the presumptive nominee in March we’ve had a global pandemic, a financial collapse, rioting in the streets, the president of the United States hospitalized, a presidential debate that looked like a Jerry Springer show yet the polling numbers have not really moved outside the margin of error,” Terry Sullivan, a Republican strategist, said. “I’m not sure that Mike Pence versus Kamala Harris is going to make the difference.”