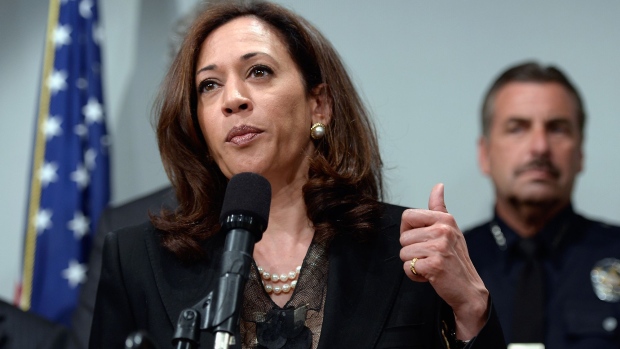 (Bloomberg) -- Senator Kamala Harris’ prospects of becoming Joe Biden’s running mate may be complicated by her own record as a prosecutor, despite her strong words in support of those protesting police brutality in Minnesota and elsewhere.

Some of the longstanding anger and discontent over the treatment of African-Americans by police and prosecutors has at times been directed at Harris, who was district attorney of San Francisco and later California attorney general.

She faced questions about some of her policies and prosecutions, including an anti-truancy program that threatened parents of children who skipped school with prosecution and her handling of claims from men of color who had been wrongfully convicted of criminal charges.

Biden has declared that his vice presidential nominee will be a woman, and he is under pressure to choose a black woman, which has intensified this week amid the civil unrest. Harris is one of five African-American women he is considering, along with former Georgia state House minority leader Stacey Abrams, Florida Representative Val Demings, Atlanta Mayor Keisha Lance Bottoms and former National Security Adviser Susan Rice.

His campaign is in the process of vetting and interviewing candidates, with an announcement expected later this summer.

Harris has several marks in her favor. She represents California, the most populous state and among the most Democratic. She made herself a household name with her presidential primary run and her strong questioning of Supreme Court Justice Brett Kavanaugh over sexual assault allegations during his confirmation hearing. She was friends with Biden’s late son, Beau, when both were state attorneys general.

While she was competing against Biden, her record prosecuting men of color came under scrutiny. A renewal of that scrutiny could dampen enthusiasm for Biden’s candidacy among black voters, who support him overwhelmingly over President Donald Trump.

“What you want in a running mate is someone who will bring assets to the ticket without a lot of liabilities,” said Garry South, a Democratic consultant in Los Angeles. “As a prosecutor having put people behind bars, she may sell well to the average white suburban voter, but in the African-American community, there are a lot of concerns about that. In this environment, does he want to choose someone with a record in law enforcement that will be pored over and viewed with a magnifying glass?”Harris, 55, is an aggressive campaigner who has won statewide elections in California three times. Harris endorsed Biden on March 8.She has been highly visible during the crisis over Floyd’s May 25 death in Minneapolis after a white police officer knelt on the African-American man’s neck for more than eight minutes. She joined protesters in front of the White House on May 30 and posted a video to her Twitter account of herself in the middle of crowd in which people chanted, “Hands up. Don’t shoot.”“People are in pain. We must listen,” Harris tweeted in posting the video.Harris has said Derek Chauvin, the officer charged with killing Floyd, “clearly committed murder” and that Trump’s response to the protests has proved “he is not fit to be commander-in-chief.”

‘Made Out of Whole Cloth’

One of the prosecutions that stirred controversy when Harris was San Francisco district attorney was that of Jamal Trulove, who served more than six years in prison on a murder charge related to a 2007 shooting. He was acquitted in a 2015 retrial. A state appeals court judge declared in 2014 that false statements against Trulove made by a prosecutor working for Harris had likely prejudiced the jury.

The prosecutor’s claim to the jury that the only eyewitness against Trulove feared for her life was “a yarn” that was “made out of whole cloth,” state appeals court Justice J. Anthony Kline wrote.

Trulove sued the city and county of San Francisco. In 2018, a jury found that police officers fabricated evidence against him and withheld exculpatory evidence. He was awarded $13.1 million.

“She’s been criticized for many of her actions and policies as a prosecutor, and it’s been building for years,” said Scott Street, a Los Angeles lawyer who worked on Loretta Sanchez’s 2016 race against Harris. “With that kind of record, I think a lot people who care about these issues are going to be concerned, particularly in light of the George Floyd case and national protests.”If Biden does tap Harris for vice president, they both need to have an explanation ready for such cases as Trulove’s, just as Biden has had to explain his support for the 1994 crime bill, said Michael Latner, political science professor at California Polytechnic State University.“Her practical experience might work against her among progressives and younger voters, but her symbolic significance as a woman of color may be more salient than her work experience,” Latner said.

Harris drew criticism from innocence advocates and others during her presidential campaign last year over her records as both district attorney and attorney general. Harris responded by describing herself as a “progressive prosecutor” who worked to thread the needle between law-and-order toughness and a protective instinct for those who needed it.Harris and Biden had one of the most memorable debate-stage clashes of the primary on a racial justice issue. She confronted him over his opposition in the 1970s to a federal mandate for busing to integrate schools, accusing him of siding with segregationist senators from the South. Biden has said he supported desegregating schools, but opposed a federal mandate.Harris dropped out of the presidential race in December but remains well-respected in the party. The prospect of Harris as a running mate has been the subject of much speculation given her unique profile as a woman of Jamaican and Indian heritage in a party that is becoming more female and less white.

She has hired a handful of aides to keep her political operation alive and has been the subject of several news articles that have intensified the buzz around her. Some Democrats saw those stories as efforts at sleight-of-hand promotion by Harris, according to three people familiar with the vice presidential effort.

“She is a tough campaigner with strong ties to networks of black voters in the South where Democrats must win,” Aimee Allison, the founder of She the People, an advocacy group that seeks to empower women of color, said in December.