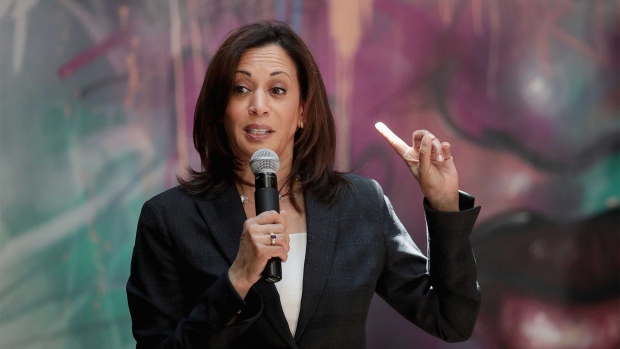 The move sets her apart from major rivals for the Democratic nomination, with a far-reaching set of executive actions aimed at allowing Dreamers, those immigrants brought to the U.S. illegally as children, to become American citizens. If the California senator wins the nomination, it promises to be a divisive issue in a general election battle against President Donald Trump, who has made restricting immigration a centerpiece of his platform.

Harris proposed four rule changes, according to a white paper by her campaign.

First, she’d set up a “Dreamers Parole-in-Place Program” to allow Dreamers who are married to a U.S. citizen to apply for a green card. Second, she’d make Dreamers eligible to seek permanent residency under an exception to the Immigration and Nationality Act by declaring that they were not at “fault” for their lack of lawful status.

Third, she’d order the Homeland Security secretary to grant retroactive work permits under the Obama-era Deferred Action for Childhood Arrival program, which she promised to reinstate. And fourth, Harris would lift the bans of 3 and 10 years for Dreamers who leave the U.S. and apply for a green card at a consulate abroad, allowing those separated from a close family member to cite “extreme hardship” to obtain a waiver.

The executive actions are all but certain to face legal challenges. Before President Barack Obama left office, courts blocked his plan to extend DACA protections with a new program that would shield some 5 million undocumented people from deportation.

“As president, Harris will take executive action to keep immigrant families together and eliminate barriers that prevent Dreamers from accessing a path to U.S. citizenship,” according to a copy of the proposal.

Harris’s parents are immigrants from Jamaica and India.

Harris’s plan also proposes allowing undocumented parents of U.S. citizens and lawful permanent residents to apply for deportation relief. All told, the campaign said it expects her plan to shield as many as 6 million undocumented people from deportation. If she’s elected president and pursues it, Harris is certain to be accused by conservatives of abusing her power.

“It’s legally sound, groundbreaking and bold,” said Frank Sharry, who runs the immigration group America’s Voice. “In a polarized political environment where bipartisan legislation is hard to come by, this is a viable strategy that could produce a breakthrough.”

To contact the reporter on this story: Sahil Kapur in Washington at skapur39@bloomberg.net

To contact the editors responsible for this story: Joe Sobczyk at jsobczyk@bloomberg.net, Anna Edgerton, Laurie Asséo