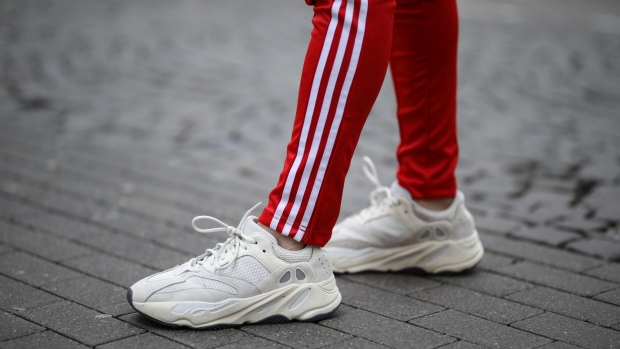 Kanye West’s deal-making with two of the world’s largest outfitters is paying off for the musician-turned-entrepreneur after he spent years mired in debt.

Yeezy, West’s sneaker and apparel business with Adidas AG and Gap Inc., is valued at US$3.2 billion to US$4.7 billion by UBS Group AG, according to a private document reviewed by Bloomberg. The value of the new Gap tie-up, which will hit stores this summer, could be worth as much as US$970 million of that total, the bank estimated.

The bank document reveals the ambitions of an alliance that hopes to emulate the success of the Adidas partnership. West, who retains sole ownership and creative control of the Yeezy brand, signed a 10-year agreement last year to design and sell clothes for men, women and kids under the Yeezy Gap label. (The arrangement excludes footwear; Yeezy’s partnership with Adidas is in place until 2026).

Gap executives have placed a lot of trust in West to help make them more relevant with younger shoppers. The San Francisco-based retailer, which also owns Old Navy, Banana Republic and Athleta, has been closing stores while putting money into e-commerce and activewear.

“Without some form of reinvention it will revert to previous struggles, which saw it lose shoppers, market share and sales,” Neil Saunders, an analyst at GlobalData Retail, said after Gap’s latest quarterly earnings.

Investors instantly recognized the significance of a West collaboration, sending shares up the most in at least 40 years when the deal was announced in June.

The new figures signal  that Gap expects its Yeezy line, which it plans to launch by July, to break US$150 million in sales in its first full year in 2022, according to the document. Gap envisions it becoming a billion-dollar revenue brand within eight years, with an upside case of sales exceeding US$1 billion as soon as 2023, the document shows.

Sales for Yeezy’s Adidas sneakers remained resilient through the pandemic, growing 31 per cent to nearly US$1.7 billion in annual revenue last year and netting Yeezy US$191 million in royalties, according to the document.

The continued success of the Yeezy brand will be especially significant for West personally. His finances and business dealings have been revealed in sporadic disclosures over the years. In 2015, the rapper and designer told BET he was US$16 million in debt. A year later he said he owed US$53 million and asked Facebook Inc. founder Mark Zuckerberg to invest in him. By 2018, Yeezy was earning more than US$100 million in royalties through its Adidas relationship.

An unaudited balance sheet of West finances provided by his lawyer includes another US$122 million in cash and stock and more than US$1.7 billion in other assets, including a significant investment in Skims, Kim Kardashian’s underwear label. West’s entire music catalog is worth US$110.5 million, according to a 2020 valuation by Valentiem Group.

But it’s West’s shoe deal with Adidas that remains his largest asset, with its constant string of limited-edition sneaker drops that routinely sell out. He started working with Adidas in 2013 after collaborations with major retailers including Nike and LVMH. Though West owns it, Adidas currently operates his Yeezy Supply e-commerce site where sneakers are released, lending its operational know-how to get shoes to shoppers who rush for the latest styles.

UBS, which prepared the document in February, said that the sneaker business was growing at a “staggering clip.” Retailers across categories have struggled to manage economic fallout from the health crisis, but sneaker sales have rebounded through the holiday season. There’s reason for optimism, as Yeezy’s rival Nike Inc. said in December that it expects revenue in fiscal 2021 to rise at a low-teens percentage year-over-year.

The final months before the Gap launch come amid a breakup with Kardashian, West’s spouse of six years, who filed for divorce in February. He’s now spending time between his Wyoming ranch and his atelier in Los Angeles, according to a person familiar with the matter. The Gap endeavor has already had its rocky moments, with West demanding a seat on the company’s board of directors and threatening to walk away from the deal in September.

Gap Chief Executive Officer Sonia Syngal said she spoke with West this month and assured analysts that he’s “very, very focused” on the new line. Few details have been released, though West has teased colorful hoodies and fleeces. Gap has described the collection as “modern, elevated basics.”

Under the terms of the agreement with Gap, West earns royalties on sales, and his rate increases as the business grows. Plus, he’ll get stock warrants as the line hits sales targets, with the highest set at US$700 million, according to a securities filing.

“The entire Gap team are heads down and believe this to be a very big potential for us,” Syngal said earlier this month.