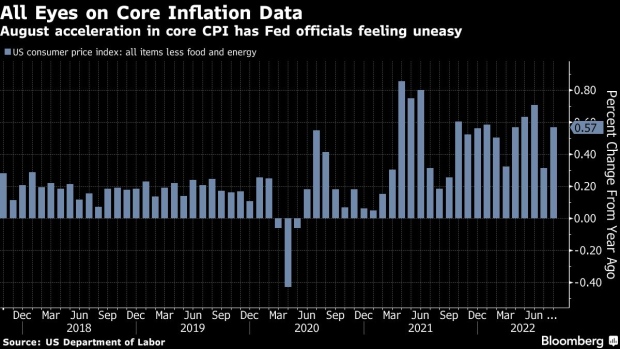 Neel Kashkari, president and chief executive officer of the Federal Reserve Bank of Minneapolis, speaks during a presentation at the National Association for Business Economics economic policy conference in Washington, D.C., U.S., on Monday, March 6, 2017. Kashkari spoke about the impact of banking regulation, and his "Minneapolis Plan" to end the too-big-to-fail problem among financial institutions. Photographer: Andrew Harrer/Bloomberg , Bloomberg

(Bloomberg) -- The US central bank has not finished the task of bringing inflation down and is “quite a ways away” from pausing its campaign of interest-rate increases, Minneapolis Fed President Neel Kashkari said.

“We have more work to do,” Kashkari said Thursday during a talk hosted by Bremer Financial Corporation. “Until I see some evidence that underlying inflation has solidly peaked and is hopefully headed back down, I’m not ready to declare a pause. I think we’re quite a ways away from a pause.”

Kashkari, who before the pandemic was known as the Fed’s most outspoken dove, has emerged this year as its biggest hawk.

The Minneapolis Fed chief and his colleagues on the central bank’s rate-setting Federal Open Market Committee have been emphasizing that they won’t be deterred by turmoil in financial markets, which have been roiled by the fastest pace of Fed tightening this year since the early 1980s, as they seek to bring inflation down from four-decade highs.

“We need to keep our eyes open for risks that could be destabilizing for the American economy as a whole. But to me, the bar to actually shifting our stance on policy is very high,” he said. “It should not be up to the Federal Reserve or the American taxpayer to bail people out.”

The FOMC, on which Kashkari sits but does not vote on policy decisions this year, has raised its benchmark rate by three-quarters of a percentage point at each of its last three meetings. It’s also signaled another 125 basis points of increases at over the course of its remaining two meetings this year. The next gathering is Nov. 1-2.

Fed officials have said a monthly Labor Department report on employment and wages due out Friday, as well as a monthly report on consumer prices due Oct. 13, will be critical inputs to the November rate decision.

“Commodity prices move up and down, but underlying inflation -- like wages and services -- tend to be stickier,” Kashkari said. “We’re not seeing any evidence yet that those things are moving in the right direction.”