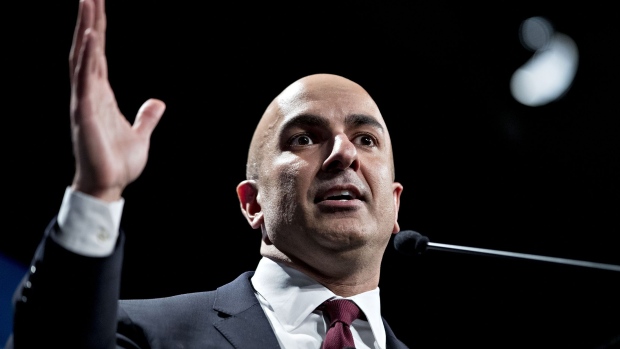 Neel Kashkari, president and chief executive officer of the Federal Reserve Bank of Minneapolis, speaks during a presentation at the National Association for Business Economics economic policy conference in Washington, D.C., U.S., on Monday, March 6, 2017. Kashkari spoke about the impact of banking regulation, and his "Minneapolis Plan" to end the too-big-to-fail problem among financial institutions. , Photographer: Andrew Harrer/Bloomberg

(Bloomberg) -- The Federal Reserve should be more concerned with restoring employment than worrying about inflation with so many Americans still out of work due to the coronavirus pandemic, Minneapolis Fed President Neel Kashkari said.

“The Federal Reserve has very powerful tools if inflation does materialize,” Kashkari said Tuesday during a television interview on CNN. “If we need to raise rates, we’ll do it, but let’s not cut off the recovery prematurely,” he said.

Fed officials reaffirmed guidance following last week’s policy meeting that they would continue buying bonds at a pace of $120 billion per month until the U.S. economy had made “substantial further progress” toward the central bank’s employment and inflation goals, without being more specific. Their guidance also states they won’t begin raising their benchmark interest rate from its current near-zero level until the labor market has reached full employment.

“Today, roughly eight million Americans are out of work who were working before the pandemic. I assume that those folks want to work again,” Kashkari said. “How long is it going to take to bring all of those folks back into the labor market and really achieve full employment? We’ll see. It may take a few years.”