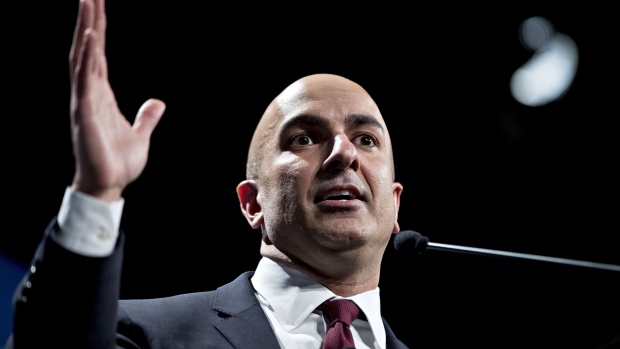 Neel Kashkari, president and chief executive officer of the Federal Reserve Bank of Minneapolis, speaks during a discussion at the National Association for Business Economics economic policy conference in Washington, D.C., U.S., on Monday, March 6, 2017. Kashkari spoke about the impact of banking regulation, and his "Minneapolis Plan" to end the too-big-to-fail problem among financial institutions. , Bloomberg

There isn’t any urgency for the Federal Reserve to offer more clarity on how long it will hold interest rates near zero at the moment because investors already understand the central bank won’t be tightening for a while, Minneapolis Fed President Neel Kashkari said.

“Market expectations are that rates will be low for a long period of time, and so I don’t feel like there’s a burning pressure that we need to change our forward guidance today to change market expectations,” Kashkari said during an interview on the Bloomberg Odd Lots podcast with Joe Weisenthal and Tracy Alloway, recorded on Aug. 26 and published Monday.

“I think the committee’s already done a good job setting expectations,” he said. “So, I think the work will come and my guess is that we will adopt some more formal form of state-contingent forward guidance, but the committee just hasn’t gotten to that conclusion yet. But I think, I suspect that we’ll get there.”

Fed Chair Jerome Powell used the U.S. central bank’s annual Jackson Hole symposium to announce on Aug. 27 a shift in strategy. Going forward, Fed officials will attempt to guide inflation modestly above their 2 per cent target temporarily following periods of undershooting, in order to average 2 per cent over time.

The change raises the question of whether the Fed will enhance its guidance on the preconditions for any future rate hikes after cutting its benchmark rate to nearly zero at the onset of the coronavirus pandemic in March.

According to the minutes of the last meeting of the central bank’s rate-setting committee in July, a number of officials thought such a change would be useful “at some point.” That’s raised expectations among Fed-watchers for an update as soon as the committee’s Sept. 15-16 meeting.

The minutes showed that officials discussed the possibility of new guidance “using thresholds calibrated to inflation outcomes, unemployment rate outcomes, or combinations of the two.” Kashkari said they should focus on inflation in crafting new language.

“More than a year ago, I proposed that the committee adopt a forward guidance that says we will not raise rates until core inflation gets back to 2 per cent on a sustained basis,” he said. “I think forward guidance that is anchored to an outcome of actually achieving our inflation target would be a big step forward relative to where we are today.”

Fed officials spent much of 2019 reviewing their overall approach to policy making after failing to lift inflation to 2 per cent throughout most of the previous decade. The pandemic and growing anger over racial injustice in America have also renewed focus on the central bank’s track record with regard to the labor market, particularly when it comes to minorities.

“We need to push the labor market as hard as we can until we get to our 2 per cent inflation target, and maybe even a little bit above it if we’re making up for prior misses,” Kashkari said. “But I think that we have to keep our eyes on both ends of that seesaw, and that’s where just targeting, one -- black unemployment, as an example, or Hispanic unemployment -- it may not actually work to balance out both sides of our dual mandate.”