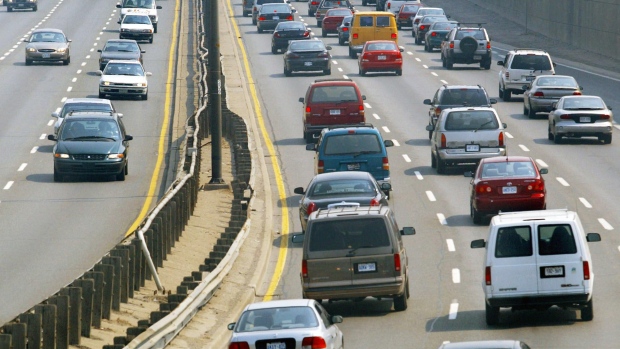 Commuters sit in traffic on the Gardiner Expressway in Toronto , The Canadian Press/Kevin Frayer, file

She also said her government will boost the amount of money municipalities will receive for transit in the form of an enhancement to an already-existing gas tax.

"As we look at other options, we have to realize people need options and there needs to be affordable options in place,” Wynne said in a news conference in Richmond Hill, Ont., saying she would reject the proposed road tolls until there are more transit options available to drivers.

Tory has previously said a $2 toll would raise about $200 million a year to support transit funding and split the cost between Toronto taxpayers and the 40 per cent of commuters from outside the city who use the Don Valley Parkway and Gardiner Expressway daily.

Wynne had appeared to have been seriously considering the toll proposal last month, when she said the Liberals would not take "unilateral action against the city of Toronto." But on Friday Wynne said she intended to listen to people’s concerns and stated there “aren’t enough choices” when it comes to transportation.

Approving tolls risked angering voters from outside the city who use those highways - commuters from so-called 905 ridings in which the Liberals need to fend off strong pushes from the Progressive Conservatives to be competitive in the next election.

The Tories leapt at the opportunity Thursday night to remind Ontarians they had been against Tory's toll proposal from the start, retweeting their own old posts about it on Twitter.

The New Democrats had also been opposed to the toll proposal, saying that instead more funding must go to municipal transit systems.