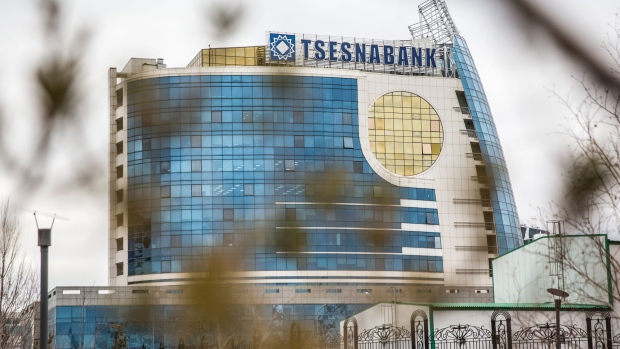 (Bloomberg) -- The Kazakh bank that received one of the country’s biggest bailout packages in recent years has paid out about $430 million in dividends, including from profits booked before the rescue.

First Heartland Jusan Bank, known as Tsesnabank before it was bought by a fund set up by leader-for-life Nursultan Nazarbayev, resumed payouts in 2020, regulatory filings show. In 2018 and the start of 2019, Tsesnabank received more than 1 trillion tenge ($2.3 billion) in state funds and was allowed to convert 460 billion tenge of deposits from state-owned companies into low-yield bonds.

Kazakhstan has struggled to clean up its banking sector, plagued by related-party lending and poor governance. The costly clean-up cost at least $18 billion since 2009 and earned the sector a clean bill of health from Fitch Ratings earlier this year, while President Kassym-Jomart Tokayev has said Kazakhstan wouldn’t rescue any more banks.

“Distributing dividends two years in a row is an exceptional situation for a bank after a restructuring, especially in the context of a pandemic,” S&P Global analyst Irina Velieva said from Moscow. Banks that have been under financial rehabilitation are usually banned from paying dividends for three to five years, she said.

Jusan Bank said it fulfilled the regulator’s demands by June 2019 and exited an oversight program, thereby removing any restrictions on paying dividends. “In 2019, the bank’s management and employees made great strides in stabilizing and restoring the lender’s health, which led to positive results for the year,” the press service said in emailed comments.

Capitalization and liquidity levels at Jusan Bank remain significantly higher than regulatory requirements after the dividend payouts, Kazakhstan’s Agency for Regulation and Development of Financial Market said via email.

Still, with the recent bailout and Kazakhstan’s economy contracting 2.6% in 2020, Jusan’s payout to its new shareholders is generous, according to Kate Mallinson, the founder of Prism Political Risk Management in London.

“There is a question mark over how the bank, when faced with the Covid-19 pandemic and lower oil prices, can pay nearly half a billion dollars in dividends after a 2019 taxpayer-funded bail out,” said Mallinson.

Tsesnabank was controlled by then President Nazarbayev’s former chief-of-staff until it was taken over by First Heartland Securities, the investment company for Nazarbayev University, in February 2019. The new owners injected 70 billion tenge into its capital and, later that year, merged Tsesnabank with a much smaller lender to create First Heartland Jusan Bank.

The combined bank paid 70 billion tenge to shareholders on last year’s profit, according to a May 24 corporate filing. According to its first quarter report, since the rescue its owners have also received 113.5 billion tenge in dividends for years back to 2013.