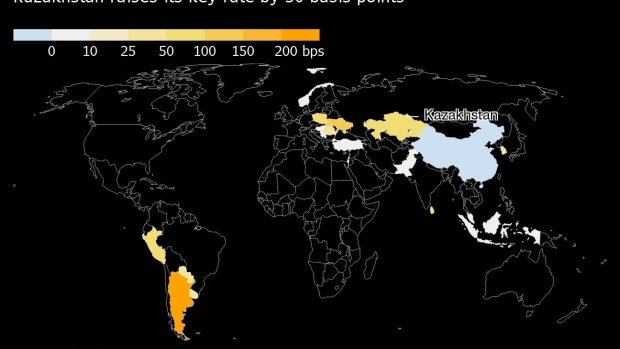 “The decision was taken based on the need to reduce inflationary expectations and to move the inflation rate into the targeted corridor of 4%-6% by the end of 2022,” the central bank said. The “tragic events” at the start of January may have spurred the pace of price growth, the central bank said, adding that inflation may end the year at a rate of 6% to 6.5%.

Protests against high motor-fuel prices erupted into nationwide riots that took hundreds of lives and led President Kassym-Jomart Tokayev bring in Russia-led troops. Tokayev ordered Kazakhstan’s 8.4% inflation rate halved by 2025, while his new prime minister demanded a raft of price measures -- including a six-month fuel-price freeze and a ban on potato and carrot exports.

As the fighting subsided and trading resumed, the central bank was forced to burn through the equivalent of $240m million to defend the Kazakh currency on Jan. 12 and 13.

According to the statement, the central bank’s rates corridor, formed from the overnight deposit and lending rates, was kept at plus or minus one percentage point around the benchmark.

The next key rate decision is scheduled for March 9, according to the statement.